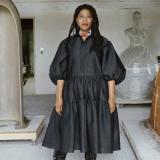 A Conversation with Artist Simone Leigh

About the Artist: Simone Leigh’s practice incorporates sculpture, video, and installation; all are informed by her ongoing exploration of black female-identified subjectivity. Leigh works in a mode she describes as auto-ethnographic. Her objects often employ materials and forms traditionally associated with African art; her performance- influenced installations create spaces where historical precedent and self-determination comingle. Through her investigations of visual overlaps between cultures, time periods, and geographies, she confronts and examines ideas of the female body, race, beauty, and community.

Leigh was born in 1967 in Chicago, IL. She is a recipient of the Foundation for Contemporary Art Grant (2018), Joyce Alexander Wein Artist Prize (2017), John Simon Guggenheim Fellowship (2016), and Anonymous Was a Woman Award (2016). Recent projects and exhibitions include: Simone Leigh (2020) at David Kordansky Gallery, Los Angeles; Whitney Biennial (2019) at the Whitney Museum of American Art, New York; Trigger: Gender as a Tool and as a Weapon (2017) at the New Museum of Contemporary Art, New York; Psychic Friends Network (2016) at Tate Exchange, Tate Modern, London; The Waiting Room (2016) at the New Museum of Contemporary Art, New York; The Free People’s Medical Clinic (2014) a project commissioned by Creative Time; inHarlem, a public installation presented by The Studio Museum in Harlem at Marcus Garvey Park, New York; and a solo exhibition at the Hammer Museum, Los Angeles. Leigh’s work was featured in Loophole of Retreat, a major exhibition at the Guggenheim Museum, New York to commemorate her achievements as the winner of the Hugo Boss Prize 2018. Leigh is the first artist to be commissioned for the High Line Plinth, where she presents a new monumental sculpture that started in April 2019. 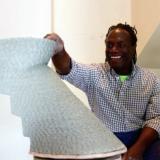 Wednesday, March 31 at 6:30 PM
This is a livestream event featured on the Art & Art History's YouTube Channel

Sam Harvey is a ceramic artist in Aspen, Colorado. Harvey received his MFA from New York State College of Ceramics at Alfred University (2001) and BFA from the Kansas City Art Institute (1984). His work is included in many public and private collections including the American Museum of Ceramic Art, CA and the Brooklyn Museum of Art, NY.   He is the owner and director of Harvey Preston Gallery in Aspen.  He recently received the prestigious 2019 USA Fellowship Award, recognizing the most compelling artists working and living in the United States.

About the Practicum Speakers Series - Spring 2021: This series of talks explores strategies to forge a sustainable, productive, fulfilling career in the arts. Speakers will discuss the trajectory and evolution of their art practices. Students and researchers from all majors and fields are welcome. 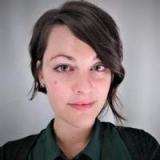 About Carlie Trott — "I am a research psychologist and Assistant Professor of Social and Community Psychology the University of Cincinnati (UC). My research is driven by the questions, “What does a psychology of transformative social change look like?” and “What psychosocial and structural factors facilitate or impede processes of transformative social change?” More specifically, my solidarity-driven research aims to bring visibility to, and work against the inequitable impacts of climate change, socially and geographically. My work draws upon theories within and beyond psychology (e.g., social movement, feminist, and empowerment theories), employs engaged research methods, and aims to advance social justice and environmental sustainability." 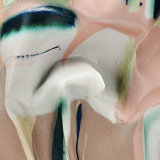 Dickey's artwork is featured in Shapes from Out of Nowhere: Ceramics from the Robert A. Ellison Jr. Collection.

Exhibition Overview:
Shapes from Out of Nowhere: Ceramics from the Robert A. Ellison Jr. Collection celebrates an extraordinary gift of 125 modern and contemporary ceramics from Robert A. Ellison Jr., made to The Met in honor of the Museum’s 150th anniversary. The exhibition will present a selection of over 75 works from this unparalleled collection that charts the evolution of abstraction in clay from the second half of the twentieth century through the present.

The exhibition highlights the myriad approaches embraced by artists who have challenged the long history of clay and its reliance on the potter’s wheel—from slight deviations of traditional vessel forms to deconstructions that reject utility and exploit the boundless experimentation that clay affords. Mid-twentieth-century by artists Axel Salto, Ken Price, Toshiko Takaezu, Katherine Choy, Peter Voulkos, and Wing Ng, are seen alongside contemporary creations by Aneta Regel, Kathy Butterly, Syd Carpenter, and Lynda Benglis—artists who continue to expand the possibilities of the medium.