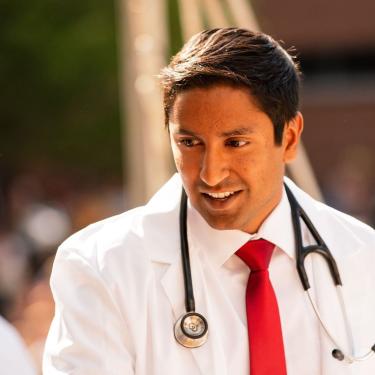 University of Colorado Boulder Applied Math alumnus Kumar Thurimella has received the Gates-Cambridge Scholarship. This prestigious award, given to 80 people out of 5,500 applicants worldwide, is presented to students with outstanding leadership and academic skills who wish to pursue a postgraduate degree from the University of Cambridge. This $250,000 scholarship will support Thurimella in his goal to obtain a PhD in Biotechnology in three years.

"With the aid of this scholarship, I am able to solely focus on my research and conduct more risky science that could have a future impact in medicine," Thurimella said. "Within the Gates-Cambridge community there are experts in sociology, ethics, and law where together collaborative efforts can augment my skills to develop technology with the most benefit for society."

After graduating from CU Boulder in 2013 with an Applied Math degree, Thurimella worked as a software engineer at Uber in San Francisco. He then went to Cambridge, where he received his MPhil in Computational Biology. With the Gates-Cambridge Scholarship, he will return to Cambridge to start his PhD training. Thurimella will work alongside experts in statistics and biotechnology in the hopes of creating more thorough mathematical models of the digestive system for patients with gastrointestinal diseases.

Thurimella’s study at Cambridge includes the interpretation of data on chemical signaling, the microbiome, genetics, and more. Using data analysis, the statistical model of a patient’s gut and the associated distresses will be more comprehensive and have the potential to personalize treatment and bring better results. Thurimella’s work to upgrade the modeling strategies for the digestive system could alter the way gastroenterology is practiced.

"...being able to enter the life sciences and develop software, build mathematical frameworks, and continually learn was something I developed in Applied Math," Thurimella said. "Applied Math taught me to have the confidence of venturing into an unfamiliar space and to use logical and rigorous methodology to approach problems in that domain."

Helping patients with gastrointestinal problems combines Thurimella’s passion for helping people in need with his intellectual curiosity and creative drive. His research focus stems from his experience with his father’s health difficulties. The struggle Thurimella went through as a relative of someone with Inflammatory Bowel Disease has guided him to help others avoid the same struggle. His work has the potential to help millions of patients with autoimmune diseases as well as their loved ones.

Upon earning his PhD at Cambridge, Thurimella plans to come back to Colorado and resume his studies for a medical degree from University of Colorado Anschutz Medical Campus. Thurimella is the third Applied Math graduate to have received the Gates-Cambridge Scholarship and shares the honor with Stephen Kissler (2014) and Derek Driggs (2017). Anna Lieb received the Churchill Scholarship in 2010.