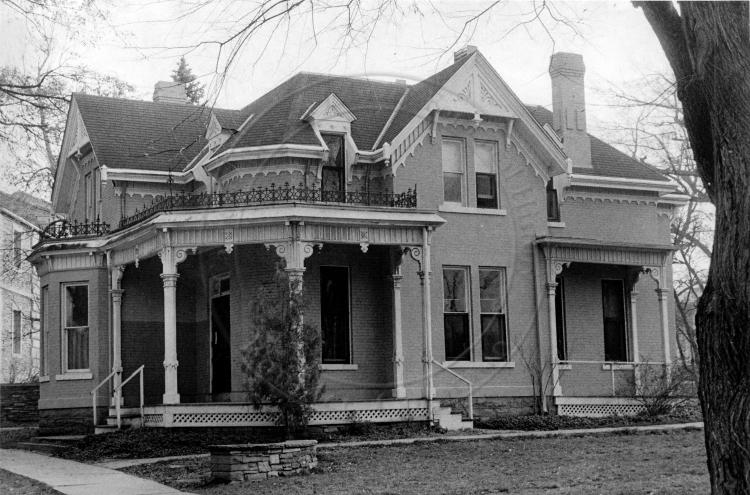 Until 1884, the entire University of Colorado (CU) was located in Old Main. That year four new buildings were added to the CU Boulder campus, including Cottage #1 and #2. Cottage #2 housed the men, while “Ladies’ Cottage” (#1) housed the women students and their house mother at the University.

In the late 1920s Cottage #2 was demolished to make room for a student union, but Cottage #1 still remains. This building, with its Victorian detailing, is one of the most historically significant structures on the CU Boulder campus today. It is a symbol of the historical presence of women from its earliest days. 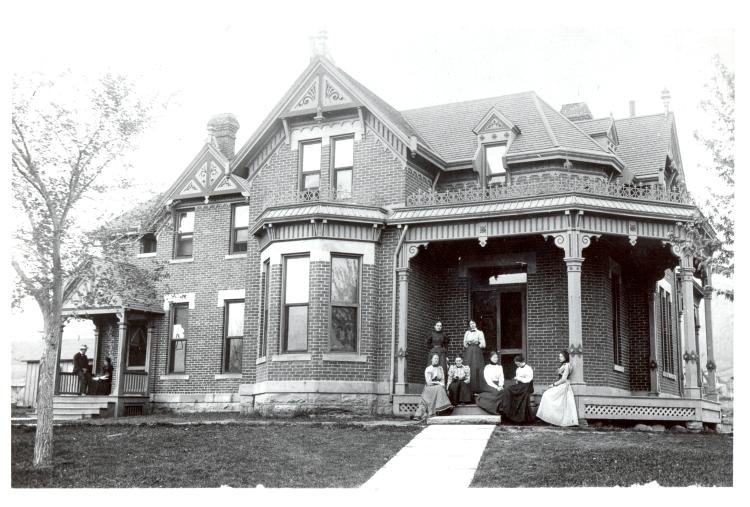 In the days when the Cottage was a dormitory, the first floor contained a large kitchen, a couple of parlors, and a large dining room, which could seat 100 people. On the second floor were 12 bedrooms and a bath. The bedrooms were unfurnished so the women students had to supply their beds, tables and other room furnishings, as well as their linens. Cottage #1 had a coal stove and fireplaces on the first floor, but there was no means of heating the bedrooms upstairs.

As sororities began to appear on campus around the turn of the twentieth century, and there were housing alternatives for women, the Cottage gradually changed from a dormitory into the women’s center and eventually came to be called the Women’s Building. It was the focus of all women’s activities on campus and the community. The Boulder YWCA was founded there and later the Cottage became the office of the Dean of Women and home to CU’s former Department of Home Economics.

For many years the Cottage was on the demolition list, but in 1993 a private fund-raising effort was launched to complete a $1 million restoration project. A local women-owned architectural firm, Andrews & Andrews, P.C., was chosen to lead the historical renovation. The support of several generous benefactors allowed our program to complete a successful and historical renovation of our building in 1997.

Commander James A Woodruff, Jr., was offered the opportunity to name the building in honor of his wife, Hazel Gates Woodruff, in recognition of his generous contribution to the project. The faculty proposed to recognize several other major donors to the project by naming interior spaces of the cottage in their honor. 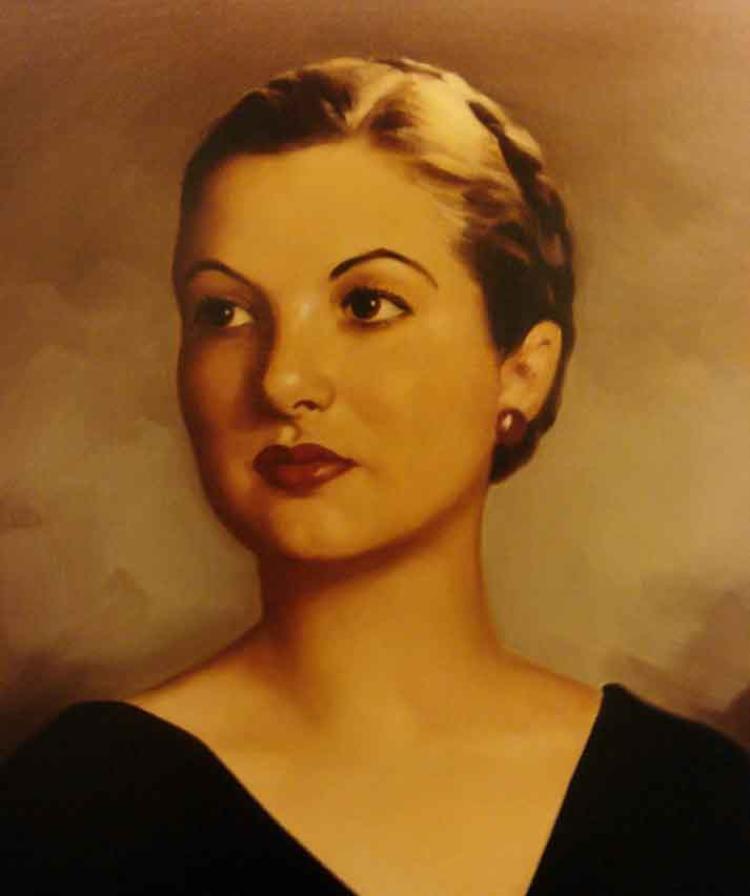 Hazel Gates was born in Denver and spent her childhood at her family home nestled among the pine and aspen trees outside Evergreen, CO. Hazel attended the University of Colorado Boulder from 1932-1934 and was a member of the Pi Beta Phi sorority. Hazel’s love for her home state and affection for the University remained great throughout her life. When Hazel died in 1994, her husband Commander James A. Woodruff, Jr., began looking for philanthropic opportunities at the University which could serve to honor her life and memory. Commander Woodruff selected the Cottage because he felt the building and the Women Studies Program embodied the spirit, special qualities, and uniqueness which best represented his beloved wife. For all of Commander Woodruff’s significant contributions to the University of Colorado Boulder, especially to this restoration project, which includes a fund for the landscaping and gardens, he was given the opportunity to re-name the building for Hazel. “The Hazel Gates Woodruff Cottage for Women’s Studies” stands as a proud tribute to Hazel’s spirit and as a symbol of the unique, interdisciplinary academic program which is housed within its walls.

Jane and Charles Butcher Seminar Room
In addition to their long-standing generosity and service to the University, the Butchers supported the Cottage renovation both financially and physically; Jane Butcher serving as the co-chair of the Cottage Renovation Steering Committee, which assisted the CU Foundation and the Women Studies Program in a number of important ways. Charles Butcher (1916-2004) was known for his philanthropy and passion for knowledge and justice, as well as his success as a businessman and scientist. Jane Butcher, who earned a degree in International Affairs from CU Boulder, is a former co-chair of the Conference on World Affairs and previously chaired the Dean’s Advisory Council of the College of Arts and Sciences, in addition to her work as a civic leader and social activist. 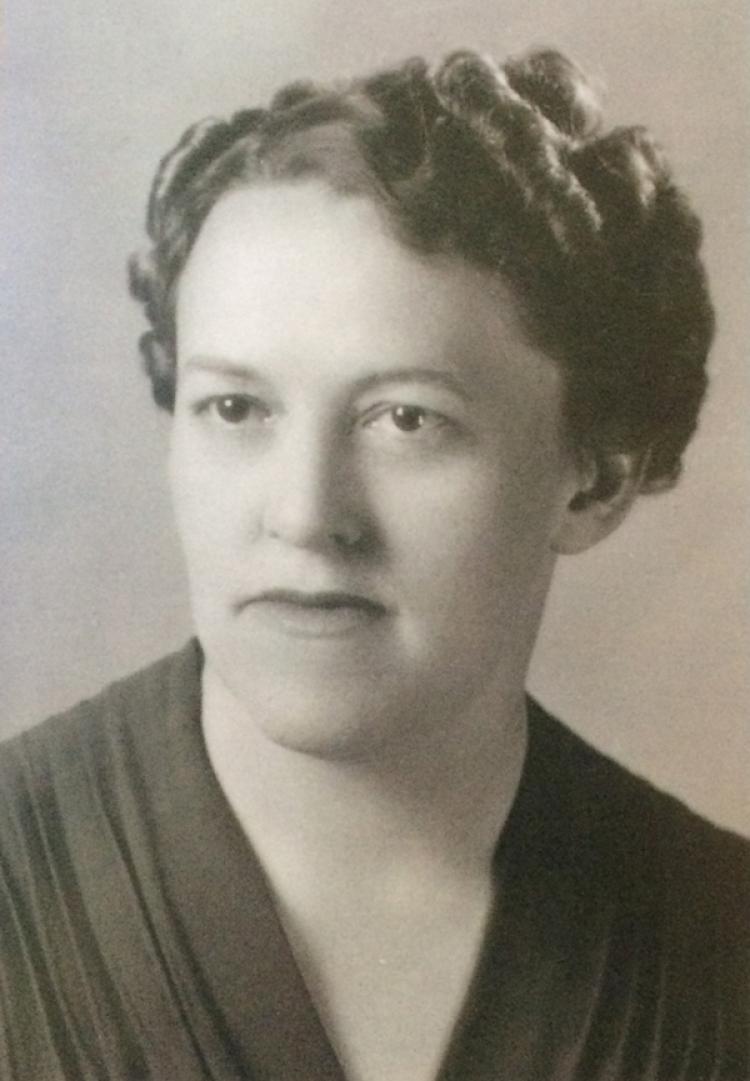 Helen Carpenter, a Colorado native, entered the University of Colorado Boulder in 1918 and graduated with a bachelor’s degree in English Language from the College of Arts and Sciences in 1922. Her job as a secretary in the Department of Education just after graduation was Helen’s first in a lifetime of service to CU Boulder. Helen’s 46-year employment history at CU went on to include the directorship of the Department of Student Personnel. In 1968, Helen retired from the Director of the Placement Service office, which she helped to establish. Helen was the recipient of numerous awards including the Robert L. Stearns Award (1965) and the President’s Citation in 1968. Her affection for her alma mater and desire to serve the University did not end with her professional career, however. Her generosity included a Boulder campus bequest which has contributed significantly to the restoration project. Posthumously, Helen’s contribution to this project was recognized by the CU Foundation and the University through a special naming opportunity. The M. Helen Carpenter Reading Room is a gathering place for students on campus, and features a special library collection as well as serving as a class room and meeting space.

Amy L. Vandersall Gallery Foyer
Bob & Diane Greenlee have dedicated themselves to a variety of important social causes by investing both their time and money to numerous civic and charitable organizations. The Greenlees are both successful entrepreneurs and active members of the community; Diane Greenlee, who has a masters degree in from CU Boulder, served as the co-chair of the Cottage Renovation Steering Committee, a dedicated group of individuals who assisted the CU Foundation and the Women Studies Program in a number of important ways. Bob Greenlee has served as a member of Boulder’s city council, and was Mayor of Boulder from 1997-1998. The Greenlees chose to use their naming opportunity to honor Amy L. Vandersall, Professor Emerita of Art History at CU Boulder.

Helen Strong Lesser Lounge
Graduating with a bachelor’s degree in Psychology in 1931, Helen Margaret Strong Lesser was a recipient of the CU Boulder Alumni Recognition Award in 1973 for her service to CU Boulder. She and her husband George Sloan Lesser (1911-1991) lived in a house across the street from the CU Boulder campus at Colorado and Regent, which they gifted to the university and is now housing the Herbst Program for the Humanities.