In Honor of Lucile 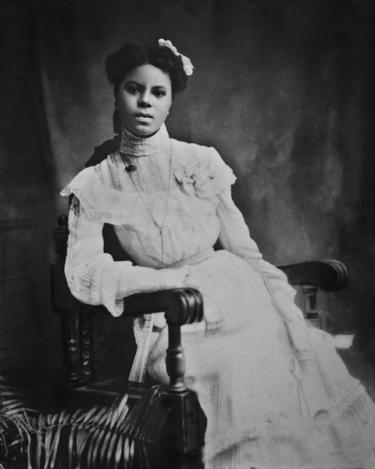 100 years ago, Lucile Berkeley Buchanan became the first African American woman to earn a degree at CU Boulder -- but she was not allowed to accept her diploma on stage with her classmates, and not included in the yearbook. Born in 1884 to former slaves Lavina and James Fenton Buchanan, Lucile earned her degree in German with a minor in English and became a teacher -- living to the age of 105, without ever receiving recognition of her academic achievements from CU Boulder.

Buchanan's story has only been uncovered through the work of Dr. Polly McLean, who herself is the first black woman to earn tenure at CU, and the first black woman to serve as the head of an academic unit, as director of Women's Studies from 2003-2007. McLean's research into Buchanan's life began more than a decade ago, and the revelation quickly led to the formation of an endowed scholarship in Buchanan's name, and a birthday party for Lucile heralded the beginning of a successful fundraising campaign. To date, eight students have been awarded the Lucile Berkeley Buchanan Scholarship in Women and Gender Studies, for their demonstrated commitment toward social justice, with preference given to first-generation college students. Additionally, the Department of Germanic and Slavic Languages and Literatures has established the Lucile Berkeley Buchanan Undergraduate Essay Prize. The prize honors the fact that Buchanan was a German major, and it carries a $300 prize for the best paper originally written for a CU German class.

To both celebrate the life of Lucile Berkeley Buchanan, and recognize her place in CU's history, several events have been scheduled this semester, culminating in Buchanan's degree being officially recognized by Chancellor Phillip P. DiStefano, where Dr. Polly McLean will accept Buchanan's degree on stage at commencement this May. DiStefano called the recognition of Buchanan "an honor that is long overdue." McLean will also give the inaugural Lucile Berkeley Buchanan Lecture on April 4th at 6pm in Old Main Chapel, where she will preview her new book about Buchanan, Remembering Lucile: A Virginia Family's Rise from Slavery and a Legacy Forged a Mile High, which will be released in May. Author and scholar Jeffrey B. Perry notes that "the outcome of McLean’s fascinating historical sleuthing rescues Lucile and her family from obscurity and is a wonderful example of history from below written from a Black feminist perspective."

Two additional events were given in Lucile's honor this semester. The first, "Afropuff Lederhosen: What Happens When You Take a Black Baby and Raise it to be German?" was presented by Vanessa Roberts, PhD candidate in Sociology, on February 20th in the British and Irish Studies Room. Roberts delivered a satirical academic lecture which offered a sharp, humorous, and theoretically-grounded exploration of the interplay between personal experience and social expectations of racialized identity. On March 15th, three scholars joined together to present the forum discussion "African Americans in Germany: European and African American Intellectual Exchanges in the 20th Century." The panelists discussed the historical trends that framed Buchanan's choice to major in German, and included Reiland Rabaka, professor and chair of the CU Boulder Department of Ethnic Studies; Beverly Weber, associate professor of Germanic studies and Jewish studies, undergraduate associate chair in Germanic and Slavic Languages and Literatures, and director of graduate studies in the Program in Jewish Studies; and Claire Oberon Garcia, professor of English at Colorado College.

"These gestures are symbolic, but symbols matter. However meager and tardy, the university’s recognition is a kind of reparation. We remember Lucile Berkeley Buchanan not only to honor her life, but also to reflect on what we once did and what we could now learn."