Finding Myself on 14ers

The wind was howling, the San Juans were expressing the full beauty of her forests and mountains and lakes, and my Dad and I were in utter heaven, standing upon a 14er. Here was the feeling of mountaineering, when success is gifted to you by the conditions and by the hard work of preparation; to stand on a place of natural significance such as a mountain peak, one begins to understand their relation to nature, and it’s uncaring for your presence. 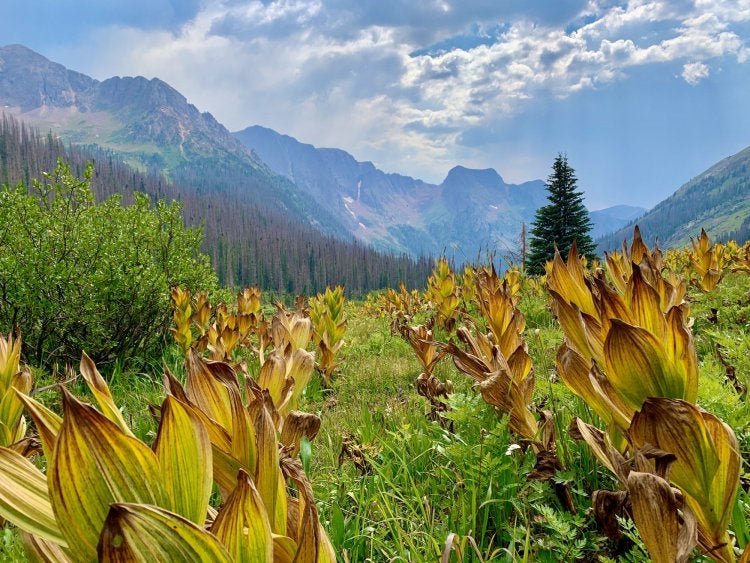 The thing is, most people get lucky to experience this feeling. The feeling of an ideal coming to fruition, such as reaching the pinnacle of a mountain. There is a sort of poetic mystic of the top of a mountain.  It has never been as simple as the significant point on a topographic map. Mountains are symbolic representations of great many things, for they are a metaphorical image of many things is life beyond the physical, like many intellectual, spiritual, or other pursuits. This is a realization that I came upon as I worked my way through my quest for all 58 CO 14ers in the summer of 2020. I knew that it would be challenging, I knew that I would learn a lot, but I had no idea that I would ultimately grow to understand life better as a result of the isolation I often found myself in. The mountains and the solitude that resides within the wilderness provided me with a deep and necessary mental healing. Insofar, my life had been a constant rush, an almost corporate lifestyle, never being able to slow down and truly feel the universe. This is a largely lost emotion in the developed world. The feeling of insignificance can truly put you in your place, can truly teach you respect and responsibility, and can seriously reshuffle your priorities. My goal is to continue climbing mountains and exploring the world, but it has taught me that in order to do this, pure virtues must come first. Trust, honesty, respect, responsibility, and intentional kindness are all-important for the longevity of both relationships and for the environment, especially for someone who spends a majority of their time in the structured chaos of nature.

I feel that on my journey to summit all 58 14ers, I have earned my way to the top of every single one, and it stands to reason that anyone reading this could benefit immensely from an experience like I have been fortunate enough to have. Between May 6th and September 13th, 2020, I spent, on average, 5 nights a week camping (almost always under the stars), 4-5 days a week on treacherous mountains carrying out grueling hikes and climbs, and battling many things: cold, heat, hunger, blisters, harsh sun, strong winds, snow, rain, hail, rock-fall, avalanche conditions, bugs of all sorts, sore and aching feet and back, long drives, fear, anxiety, exhaustion, boredom, and aloneness. Spending so much time enduring these harsh afflictions has made me stronger, and ready for more. I do not wish to spend any more of my life climbing easy peaks, as I only look forward now to more difficult, more technical, and more famous routes up peaks all over the world. 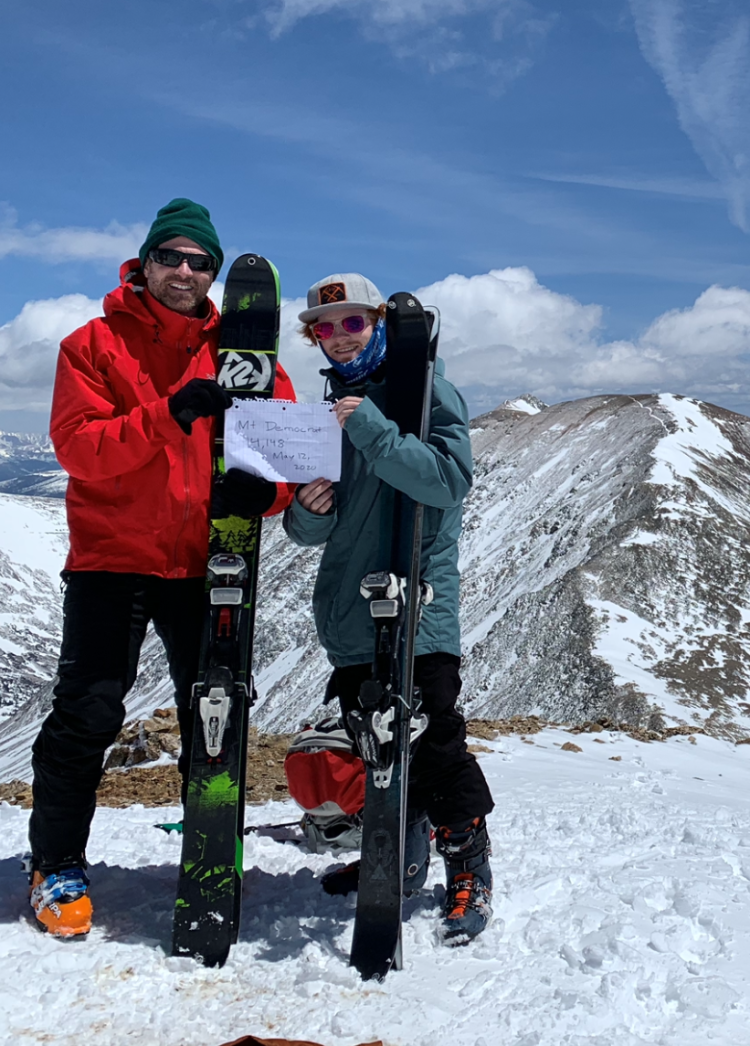 To explain what I just said: a majority of the 14ers are rated class 1 or class 2, which means that most of them only involve walking (hiking) to reach the top of the peak. After a while, these become monotonous, indifferent, and not even close to being challenging. However, luckily, 19 of the standard routes up the 14ers are rated class 3 or 4, meaning they involve scrambling on at least some small portion in order to get to the summit, so I was able to grow a bit and learn more than how to walk up a 14er.

Prior to this year, I had climbed 11 14ers and all of these (with the exception of Longs Peak) were class 1 or 2. I wanted to do harder routes up some of the 14er’s than their respective standard routes because I knew I would learn more from a more technical challenge than from more basic walk ups. I thus decided to include a mini-challenge to my already massive challenge: I completed the 4 Classic CO 14er traverses in addition to the 58. These are 4 routes that each connect 2 14er’s together, and all 4 are rated either class 4 or class 5 (class 5 is defined as full-on rock climbing). I couldn’t wait to tackle this challenge, since these were all amazing routes that showcased the dramatic nature of Colorado. I planned to do all 4 routes in July, when I would already be in good shape for the ‘marathon days’ many peaks required and when I would also be prepared for the mental challenges that are present in addition to the physical difficulty of these routes.

My first traverse was the El-Diente-Mt Wilson Traverse. My dad and I drove from Erie, CO to the Wilson Group near Telluride, CO. We slept in the parking lot, then the next morning we backpacked up to Navajo Lake in the middle of the Wilson Group. We then summitted Wilson Peak, the peak on the Coors Light can. It was a neat experience to be standing on the top of a mountain as famous as Wilson Peak. The next day, we attempted the traverse. After climbing up a 2000 ft, class 4, loose buttress to reach the summit of El Diente Peak, we began to make our way along the connecting ridge to Mt Wilson. The biggest challenge of this traverse is that the entire Wilson Massif is incredibly loose, and we were traversing along a ridge with thousands of feet of exposure underneath us. We had to have good patience in our footing to not fall, confidence in our route-finding, a stable weather window, and speed in order to make it across and up class 4 climbing safely with potential afternoon weather rolling in. This was my dad’s first class 4 14er, and we successfully made it! After about 2 hours of delicate route-finding, we summitted Mt Wilson. The wind was howling, the San Juans were expressing the full beauty of her forests and mountains and lakes, and we were in utter heaven, standing upon a 14er.

The uncaring of nature for your presence must always remain in your mind and in your decision making. Mountains, especially, are treacherous, but it is the very danger of them that appeals to me and others. You must mentally be tough in order to overcome danger. Being tough in the mind is the most important thing I learned this summer, because it will allow me to overcome any obstacle that is presented to me in the future. Being tough in the mind allowed me to complete my goal of exploring Colorado in a most classically-Colorado style, by climbing its tallest mountains.

The best day of my summer was on my last 14er, but not because it was the last one of the project. It is because, on September 13th, I did the most advanced mountaineering route I’ve done to date. As number 58, the last peak in my project, I summitted Longs Peak via Kieners Route. Longs Peak, the mountain that inspired me from the time I moved here to climb, can be described as the perfect mountain. It offers great potential for every discipline of mountain climbing: hiking, skiing, rock climbing, ice climbing, high altitude, and even big wall climbing, and Kieners route is the most classic mountaineering route on the peak.

You all may remember that Colorado got a very early snowfall on September 8-9, only a few days prior to my climb of Kieners route, making conditions much more difficult than usual for mid September climbing. This snowfall actually made me enjoy the final peak of my project much more because I think it squeezed out every ounce of the potential of mountaineering. I learned how much more I had to learn, how much more I wanted to do, and how far I had to go to reach my goals. However, it also showed me just how much I’ve learned this summer. At the beginning of the summer, I was nervous about doing even a class 3 climb. Now, I was doing Kieners Route, a famous route on a very famous peak.

My dad, his pilot friend Steve (an accomplished mountaineer who has been on 6 Alaskan expeditions, multiple ice climbing trips to Scotland, and an attempt of the Eiger North Face), and I all set off from the Longs Peak trailhead at 1 AM. We hiked up the standard trail for a few hours, then eventually turned off the trail towards Chasm Lake. We began seeing snow on the ground once we were near the Lake, which was also when we transitioned into our technical gear. We were going to simul-climb Lambs slide, with Steve leading, my dad in the middle, and me at the end, cleaning the route. With crampons on and ice tools in hand, we started up Lambs slide, a long 1000 ft, 50 degree snow-couloir with exposed black ice in various spots. Steve put in pro periodically along climber’s right of the couloir. We made good time, moving up Lambs Slide, with the sun rising just as we began climbing from the base of the couloir. 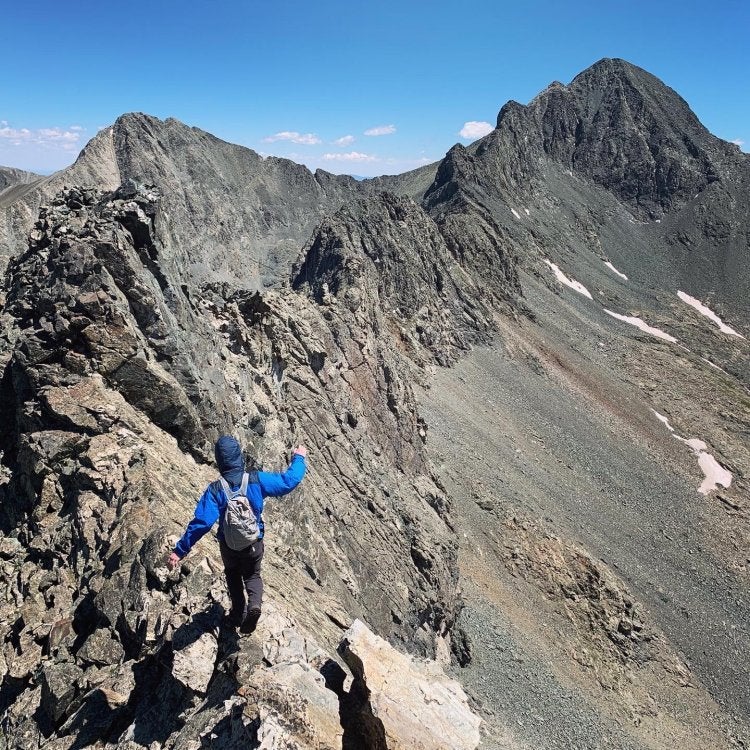 We reached the entrance to Broadway, a narrow ledge that horizontally splits the Diamond face in half, and continued to simul-climb as we walked along. Due to the snowfall a few days before, Broadway had a lot of fresh snow on it which made the going much more difficult. The rocks underneath were icy, so we were quite careful with our foot placements. After crossing Broadway to the base of the Notch Couloir, we began the rock climbing portion of the ascent. However, this was mostly mixed climbing rather than rock climbing, because the snow made the parts in the shade pretty icy. This was an extremely fun portion of the route, because it was about 5 pitches of easy mixed climbing above a most dramatic basin. Eventually, the terrain became easier and less steep to climb, so we unroped. Only one more little section warranted roping up for, and then we were nearly at the summit. A short jaunt to the top later and I was standing on my 58th 14er of 2020. I was a little emotional but extremely relieved and grateful for the experience. We had a small snack, and then set out down the mountain. It was about 4 pm and the sun was starting to go down. We were going to rappel down Cable’s route then hike back to the trailhead. After a 3-pitch rappel, we still had to make it down out of the boulder field, which was probably the least fun part of the day. After 58 14ers, in which all 58 have plenty of talus to make your way through, I was glad to be picking my way though my last talus field for the time being.

I made it back to the car around 10:15 pm. This was a 21 hour day, by far my longest day of the season, and it was the best day of my life. I had the best summer I’d ever had, and I am very grateful for all my experiences with nature. I am also extremely grateful for the people that aided me along the way, and I want to thank the following people: Alec Vanlandingham, my climbing partner on many summits, Steve Towne, who allowed me to have the best and most inspiring day of my life, and my parents, Geoff and Amber Warlock, who have always been my heroes and my biggest supporters. The 14er project is now part of me, and I hope to continue building upon it in the future with bigger and harder peaks and challenges.