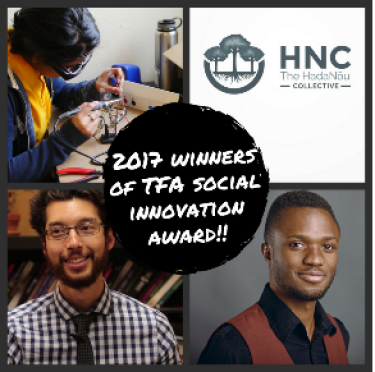 Denver, CO - The alumni entrepreneur winners of Teach For America’s 2017 Social Innovation Awards were announced today. They are Colorado’s own, The HadaNõu Collective (formerly HackSchool), which develops new centers and schools grounded in what its founders call community-led, Authentic Education” and the New Orleans-based unCommon Construction. The HadaNõu Collective (HNC) was founded and started right in the heart of Denver by its two co-founders, Wisdom Amouzou and Nathan Pai Schmitt, and their community of students, families, and educators.

A year ago, they were just reeling from the excitement of a successful Kickstarter campaign when they found out they did not advance in the previous year’s TFA Social Innovation Award cycle. In fact, they didn’t make it past the second round.

At the time, HNC was just one small center in the middle of Northwest Denver called HackSchool. If you had walked into this center, you would have seen a group of puzzled yet passionate students and dedicated educators circled around a 3-D printer and unused circuit boards. 12 months later, they’ve sent students to advise President Obama, secured major funding, built an impressive team of world-class educators, deepened relationships with community stakeholders, and were just named winner of a the  Social Innovation Award.

Their profound belief in the power of education kept them motivated. Nathan remarked, “for too long, systemic change in education has been reserved for policymakers too far removed from the classroom. As cofounders, we’re building HNC because we believe that change can and must come from students, families, and educators.” For HNC, It’s not a matter of student voice, parent voice, and teacher voice but power. A recurring question they pose to each other is, “can we build enough collective power through our centers, our schools, and our approach to education to actually transform a broken system?”

As a graduate of Aurora Public Schools, Wisdom has firsthand experience being underserved in broken school systems. He recounts, “45% was the on-time 4 year graduation rate when I was a Senior at Gateway High School. My Honors Algebra II teacher would teach for the first 5 minutes of class and spend the rest of the time playing computer games in the back of the classroom. And that was the honors teacher.”

Some 183 teams from around the country applied to be considered for Teach for America’s annual Social Innovation Awards this year, the largest application pool in the award’s six-year history. A panel of 12 judges (including alumni entrepreneurs, philanthropists, venture capitalists and members of Teach For America’s executive team) heard pitches from each finalist, met with finalists in small-group interviews, and made the winning selections. Judges, compelled by The HadaNõu Collective’s focus on student agency and deep learning, called the venture a “big idea” to both empower long-standing public schools to drive their own innovation, while also creating new public schools through HNC.