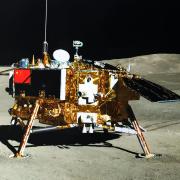 From Wired: China made history earlier this year when its Chang'e-4 lander became the first spacecraft to land on the far side of the moon. During the two-week lunar days, the lander and its small rover, Yutu 2, beam images and other data to an orbiter for relay back to Earth. Together they’ve furnished planetary scientists with unprecedented access to the backside of our Janus-faced neighbor. But not everyone was thrilled that China crossed into this new lunar frontier, and few have been more vocal about their concerns than the scientists involved in the search for extraterrestrial intelligence.

Last month, the SETI permanent committee of the International Astronautical Association hosted its second round of negotiations about the lunar farside in Washington, DC. The exploration of the moon might seem like an issue outside the purview of this group of professional alien hunters, but the far side of the moon is the most radio quiet place in the inner solar system and they want to keep it that way in case ET calls. Indeed, they argue that the fate of the lunar farside may determine whether we ever detect a signal from an extraterrestrial intelligence.

“At the moment, SETI is not doomed, but it might be doomed in the next 50 years and that’s being optimistic,” says Claudio Maccone, an astrophysicist and the chair of the IAA SETI committee. “We must insist on this topic while there is still time to do something.”

On Earth, radio astronomers must contend with interference from television broadcasts, cell phone signals, satellites, and the atmosphere as they scan the cosmos for faint signals from primordial stars, organic molecules, or intelligent life. This makes the lunar farside an attractive site for future radio telescopes because the moon blocks all the radio signals from Earth. It’s like the difference between stargazing in New York City and stargazing in the middle of the desert—in the city light pollution obscures almost all of the good stuff. Read more...