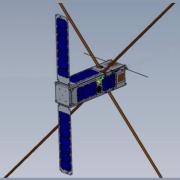 From NASA: NASA has selected nine proposals to study using small satellites, or SmallSats, for advanced astronomical space-based observations. The proposed SmallSat studies are a fraction of the size, weight, and cost of a typical space-bound astrophysics mission. They cover a mass range from 12 kg to 180 kg. Formation flying, or “constellations” of such satellites were considered as well. These SmallSats are envisioned as being larger than CubeSats already being developed, but smaller than Small Explorer (SMEX) missions.

The selected studies will carry out a detailed analysis of the mission needed to accomplish the proposed science. This analysis will allow a more optimum and more detailed design of the mission, including a more accurate cost assessment. The science goals of the nine missions include studies of planets outside our solar system, or exoplanets, in the X-ray band, with an external occulture ‘star shade’ to blot out the light of a host star, and to measure the masses of exoplanets by detecting wobble in their host star; finding and studying the explosions and collisions of compact objects that produce gravity waves; doing extremely precise x-ray imaging and extremely precise x-ray spectroscopy; and studying the evolution of the Universe both before galaxies formed and at the peak of galaxy formation.

SmallSats are an exciting example of how new technology and clever thinking can take something the size of a dorm-room fridge and do cutting edge astrophysics,” said Paul Hertz, Astrophysics division director at NASA Headquarters, Washington. “The results of these studies will tell us what we can, and what we cannot, do for relatively low cost to achieve big science results.”

The missions and the Principal Investigators selected for study are:

The studies will take place over a six-month period concluding in Spring of 2019. Depending upon the results of the studies, some of these concepts may be submitted to an upcoming Astrophysics Explorers competition to actually build and fly the mission.

If proven feasible, such platforms could provide new and exciting avenues from which to study specific aspects of the Universe at a comparatively low cost. Such satellites would “hitch a ride” to space aboard launches for other, more sizable spacecraft, or be deployed from the International Space Station. Read more...