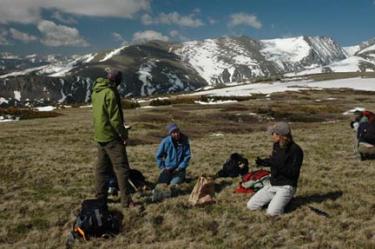 The MRS is located in the Front Range of the southern Rocky Mountains in Boulder County, Colorado, 40 km (26 miles) from the main campus. The administrative headquarters are located at 2900 m (9500 feet) in the 77 hectare (190 acre) Columbine Springs Reserve, owned by the University, and surrounded by the Roosevelt National Forest. Most of the research is done on nearby Niwot Ridge, an east-west trending ridge running down from the continental divide (Navajo Peak 4087 m or 13,409 feet). Most of Niwot Ridge is managed as a 718 hectare (1775 acre) Biosphere Reserve by the Forest Service. Manipulative research is allowed with the approval of the USFS and MRS, a process facilitated by a management plan negotiated in 1998. Researchers also work in the Green Lakes Valley, owned by the City of Boulder, immediately south of Niwot Ridge. Within a 6 km (4 mile) radius of the MRS, researchers have access to a multitude of vegetation types, including ponderosa pine, lodgepole pine, aspen, and spruce-fir forests, montane and subalpine meadows, alpine tundra, streams, lakes, small ponds, and riparian corridors. Geomorphic features, both glacial and periglacial, are abundant in the upper elevations. The southernmost glacier in the Rocky Mountains is located in the adjacent City of Boulder watershed.

Research on nearby Niwot Ridge has contributed substantially to our understanding of the environmental science of mountain systems and is recognized internationally for its excellence. In particular the MRS is probably the best known site specializing in alpine environmental science in the world. Research emphases include plant and animal ecology, biogeochemistry, hydrology, geomorphology, and atmospheric science.

Explore the results of a recent extensive camera trapping study at the MRS funded by the National Science Foundation and led by Roland Kays and Monica Lasky of the NC Museum of Natural Sciences and NC State University.  https://public.tableau.com/profile/monica.lasky#!/vizhome/MRSCameraTrapData/FinalProduct?publish=yes

The Mountain Climate Program was initiated in 1952 to evaluate the relationship between climate and the major ecosystem types of the Front Range. Weather stations were established in each of four major ecological zones, spanning a 1540 m altitudinal transect: lower montane forest (A-1 site), upper montane forest (B-1), subalpine forest (C-1), and alpine tundra (D-1). The climate record from D-1 is now the longest, high-altitude record in North America. Analysis of the long-term trends for the climate stations indicate an increase in precipitation at the highest elevations, and an increase in temperature at the lower elevations, trends that are consistent with regional analyses. In addition to the these original four climate sites, numerous smaller weather stations have been installed and are operating on Niwot Ridge and in the neighboring Green Lakes Valley of the the City of Boulder watershed.

The Climate Program also participates in the National Atmospheric Deposition Program, which monitors selected acidic ions, nutrients, and base cations in precipitation on regional and national scales. The Climate Program has operated two sites, one in the alpine and one in the upper montane forest, since 1984 and 1986, respectively. These data are available at http://nadp.sws.uiuc.edu.

Atmospheric gas concentrations have been measured on Niwot Ridge for several decades as part of several programs funded by NOAA. CO2 have been monitored on Niwot Ridge since 1968, constituting the third longest record on the world. Analysis of the CO2 concentrations indicate that the onset of spring has come earlier, the end of fall is later, and the seasonal amplitude of CO2 has diminished. Other atmospheric trace gases that are measured regularly include greenhouse gases, halocarbons, including chlorofluorocarbons (CFCs), and ozone.