Conversation Analysis and Interactional Linguistics (CA/IL) is the study of the mutually shaping relationship between linguistic resources and social interaction. We take a cross-linguistic and multi-modal approach to investigating how humans collaboratively construct and interpret actions in sequences of action—that is, how we make sense with one another—in both mundane and institutional contexts, including medicine, political debates, and customer service interactions.

The Department of Linguistics at CU-Boulder is a leading site for research in Interactional Linguistics and Conversation Analysis. Indeed, we are unique in offering the only Linguistics Ph.D. with this specialization in the United States. Our faculty teach a range of courses on language in social interaction at both the graduate and undergraduate levels, in addition to offering special workshops and institute courses both at CU as well as internationally. Our research group also conducts regular data sessions that feature ongoing projects by students and faculty, as well as hosts renowned visiting scholars from other institutions. 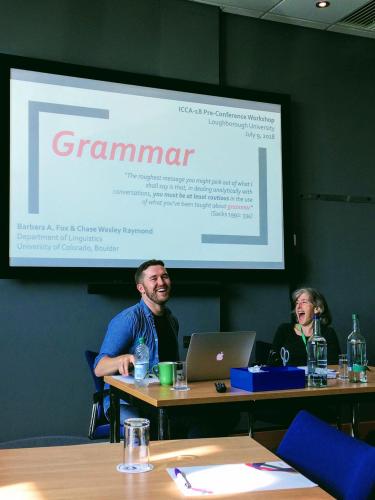 Prof. Barbara Fox has worked extensively on a range of grammatical phenomena, including anaphora, repair, and the relationship between grammar and social action, which she approaches from a typological perspective. In her current research, she is exploring the linguistic and embodied practices used in customer service interactions.

Prof. Chase Raymond is interested in sense-making in social interaction, especially with regard to the ways in which grammar interacts with issues of normativity, identity, and social relations. He has published on several interactional phenomena, including reference, repair, epistemics, and language/dialect contact. In his current research, he is exploring the use of negation in 'mundane', political, and medical contexts.

[Profs. Fox and Raymond at their workshop on 'Grammar in Interaction'
at the International Conference for Conversation Analysis (ICCA),
held at Loughborough University, U.K. in July of 2018.]