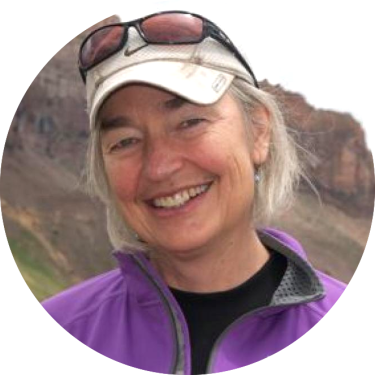 Interactions of weathering and erosion to shape the architecture of the critical zone; surface water hydrology

Suzanne has been at the University of Colorado and a member of INSTAAR since 2003. She studied chemistry as an undergraduate. The eruption of Mount Saint Helens in 1980, which exploded at a personal inflection point in her life, turned her onto geosciences as a discipline. She was pulled into the field of geomorphology by the dynamic groups of students and faculty in geomorphology, periglacial processes, and glaciology at the University of Washington, and completed an MS thesis in geological sciences at UW on permafrost in 1986 under the supervision of Bernard Hallet. After a brief stint working in Sam Epstein's stable isotope lab at Caltech and teaching at Pasadena City College, she moved to Santa Cruz, California and began a PhD at UC Berkeley. Her dissertation on chemical geomorphology (a term Suzanne coined) was one of several that came out of the Coos Bay project, supervised by Bill Dietrich and Keith Loague. Suzanne then merged her interests in glaciers and weathering in an NSF Earth Sciences post-doctoral fellowship at the University of Wyoming, where she worked with former UW colleague Neil Humphrey and with geochemist Tim Drever. Suzanne has been involved in critical zone science since the inception of the Critical Zone Exploration Network, and has directed the Boulder Creek Critical Zone Observatory since 2007. She co-authored the textbook Geomorphology: The Mechanics and Chemistry of Landscapes with her husband Bob Anderson in 2010.

Earth is a rocky planet, whose outer surface is burnished over time by physical and chemical weathering at the rock/atmosphere boundary.

My research interests lie in understanding the effects of weathering, and the processes that drive weathering.  These topics lie at the heart of geomorphology and surface process research, as rock weathering sets the stage for the landscape sculpting processes of erosion.  Like a dog chasing its tail, feedbacks between process and form make it difficult to identify a starting point.  The movement of water and actions of weathering and erosion processes set the architecture of the interface between the atmosphere and the rocky lithosphere, which in turn affects water flow and erosion.  Chemical alteration of rock in surface environments contributes to geochemical cycles, connecting the local—even on a miniature scale—to the global.  Soils accumulate where the balance between weathering and erosion builds capital of this life-supporting residue.

The notion that intertwined actions of surface energy inputs, rock decay, gravitational pull, and living organisms shape the Earth’s surface is articulated by defining the surface as the “critical zone”.  I have worked for more than a decade to define critical zone science as an integrative approach to understanding habitable environments (Anderson et al., 2004, Eos Transactions, AGU 85 (28):  265,269; Anderson et al., 2007, Elements 3: 315-319).  I led a successful bid for one of the original Critical Zone Observatories (CZO) funded by the National Science Foundation in 2007.  The Boulder Creek CZO involved some 15 faculty and senior researchers in interdisciplinary research understanding the architecture, function, and future of the critical zone, using the Colorado Front Range as a natural laboratory for this exploration (http://criticalzone.org/boulder/).

Within the framework of critical zone science, my research has three branches:

Water is required for chemical alteration of rock to proceed.  Chemistry of stream runoff would seem to be a straightforward means of measuring on-going chemical weathering processes.  The picture is clouded somewhat by the fact that water flow paths contributing to runoff vary with changing discharge. Thus, interpreting chemical weathering from runoff involves analyzing watershed hydrology.  The Gordon Gulch watershed in the Boulder Creek CZO provides an excellent laboratory in which to examine changing hydrologic conditions and their connection to hydrochemistry.  The stream channel runs east-west, and thus the catchment is dominated by north and south-facing aspect hillslopes.  At ~2500 m altitude in the Colorado Front Range, the differing energy balance on these pole and equator facing hillslopes translates into a difference in winter solar radiation of nearly a factor of 3 and consequently entirely different snow regimes (Anderson et al., 2014, Procedia Earth and Planetary Science).  We have also found that water flowed rapidly through the soil matrix on north-facing slopes during snowmelt, while water flow was episodic and dominated by preferential flowpaths on south-facing slopes (Hinckley et al., 2014, Hydrol. Process.), and that heterogeneity continues to dominate hydrologic behaviors on both slopes during summer rains as well.  Modeling these flow regimes, Langston et al. (2015, Earth Surf. Process. Landfms.) concluded that greater water delivery to the bedrock weathering front was accomplished on north-facing slopes.

A major missing component in our Gordon Gulch watershed observations is data from the riparian zone that will connect the hillslope observations with streamflow.  This connectivity is currently being studied by Kamini Singha (Colorado School of Mines) and Mike Gooseff (CU CEAE).  In this semi-arid climate, water use by vegetation also plays important roles in water flow.  Snow and water use by trees was investigated by BcCZO post-doc Dave Barnard with Holly Barnard (CU Geography) and Noah Molotch (CU Geography).  Integration of these various focused projects into a broader understanding of the hydrology and hydrochemistry of Gordon Gulch is an important goal in the next several years.  Furthermore, I hope to use this understanding to build models that can be used to investigate changes in water and solute fluxes under changing climate regimes.

Two boundaries are important in the interface region between the lithosphere and the atmosphere:  the lower boundary between fresh rock and weathered rock—the weathering front, and the upper boundary between ground and air—the surface topography.  While we can measure surface topography in exquisite detail with LiDAR, imaging the deep weathering front is much more difficult.  Consequently, understanding how the deep weathering front propagates is a frontier in critical zone science.  Seismic refraction imaging in the Boulder Creek CZO (led by faculty member Anne Sheehan and grad student Kevin Befus) showed that the depth to fresh rock is ~2 m greater under north-facing slopes than under south-facing slopes in Gordon Gulch (Befus et al., 2011).  The apparent slope-aspect control on weathering front depth (Anderson et al., 2014, Procedia Earth and Planetary Science) has inspired investigation of processes that may be responsible.  As the weathering depths are on the order of 10 m, and total denudation rates are ~30 m/Myr, the full depth of the weathering profile integrates over a period of ~300,000 years (Foster et al., 2015).  This timescale implies evolution during Quaternary glacial climates, and consequently I have explored (with Bob Anderson and Greg Tucker) a frost-cracking model for weathering front propagation (Anderson, RS et al., 2013, Earth Surf. Process. Landfms).  Analysis of soil pits and shallow rock cores shows minor chemical alteration of the rock, and detectable differences in rock strength by slope aspect (Anderson et al., 2020).  More work can be done examining the chemical alteration of rock in Gordon Gulch, particularly with a deep core that would extend into unaltered rock.

Integration of weathering and erosion processes

The connection between weathering and erosion in shaping critical zone architecture was a major theme of the Boulder Creek CZO.  A significant feature in the Boulder Creek watershed is the canyon Boulder Creek has carved through crystalline rock in the Front Range.  We hypothesize that the canyon resulted from upstream migration of a knickpoint in the river, spawned by exhumation of the Plains (Anderson RS, et al., 2006; Anderson et al., 2012, Comptes rendus- Geoscience).  Hillslopes lining Boulder Canyon tend to be steepest, and the canyon is narrowest, near the knickpoint.  Downstream, the canyon widens, the canyon walls are less steep, and are increasingly dissected by ephemeral channels.  Examining the downstream evolution of these slopes is a subject of ongoing research.  An examination of landsliding and debris flows in the 2013 "storm of the century" that ravaged the Colorado Front Range showed that landslides and debris flows were produced exclusively from the steep (>25°), colluvium-mantled slopes lining the canyons, rather than the more rocky locations (Anderson, SW et al., 2015, Geology).  Consequently, the production of colluvium on rocky slopes stands as an important precursor step to landsliding and debris flow generation. Moreover, Rossi et al. (2020; Geophys. Res. Lett.) found that storm runoff in the Front Range is not only controlled by storm characteristics (which vary with elevation), but also by watershed characteristics, e.g. rockiness (which presumably vares with elevation as well). Distinguishing where slopes are rocky, and where they are soil mantled will have utility in predicting flash flood hazard (from rocky areas) and landslide hazards (from soil-mantled areas) in regions beyond our Front Range landscape.

My efforts in Boulder Creek on the erosion-weathering connection are complemented by a collaborative effort with Marin Clark (U Michigan) to examine the role of weathering on rock strength and landslide susceptibility during earthquakes.  Our initial work was supported by pilot funding from the National Earthquake Hazards Reduction Program (NEHRP grant, 2015).  We examined weathering depth, rock strength, and weathered character of similarly aged basalt flows across a climate gradient on the Kohala peninsula of the big island of Hawaii.  We are planning our next steps over the coming year.
Collectively, these efforts in understanding hydrology, weathering front advance, and weathering-erosion connections build toward development of a comprehensive model of the evolution of the Earth’s surface.

Tectonics, fracturing of rock, and erosion

A disappearing lake reveals the Little Ice Age history of climate and glacier response in the icefields of Wrangell-St. Elias National Park and Preserve

Mechanical-chemical weathering linkage: Erosion and solute fluxes due to glaciers

Strong feedbacks between hydrology and sliding of a small alpine glacier

Weathering profiles, mass-balance analysis, and rates of solute loss: Linkages between weathering and erosion in a small, steep catchment