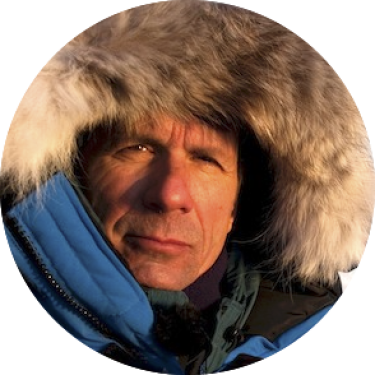 For 35 years, photographer James Balog (“BAY-log”) has broken new conceptual and artistic ground on one of the most important issues of our era: human modification of our planet’s natural systems.

He and his Extreme Ice Survey team are featured in the 2012 internationally acclaimed, Emmy award-winning documentary Chasing Ice and in the 2009 PBS/NOVA special, Extreme Ice. James has been honored with many awards, including, most recently, the Heinz Award, the Duke University LEAF Award, the Rose-Walters Prize at Dickinson College for Global Environmental Activism, an Honorary Doctor of Science Degree from the University of Alberta, and the American Geophysical Union Presidential Citation for Science and Society. He is the author of ICE: Portraits of Vanishing Glaciers and seven other books. His photos have been extensively published in major magazines, including National Geographic, and exhibited at more than one hundred museums and galleries worldwide. In 2009, he served as a U.S./NASA representative at the United Nations Conference on Climate Change (COP 15) in Copenhagen. In 2015, at COP 21 in Paris, he made numerous presentations on behalf of the Natural Resources Defense Council (NRDC), The United Nations Foundation and Solutions COP 21 at the Grand Palais.