Researchers from NOAA and the University of Colorado have devised a breakthrough method for estimating national emissions of carbon dioxide from fossil fuels using ambient air samples and a well-known isotope of carbon scientists have relied on for decades to date archaeological sites.

Modified from a NOAA story by Theo Stein.

In a paper published in the Proceedings of the National Academy of Sciences, they report the first-ever national scale estimate of fossil-fuel derived carbon dioxide (CO2) emissions obtained by observing CO2 and its naturally occurring radioisotope, carbon-14, from air samples collected by the NOAA Global Greenhouse Gas Reference Network.

Carbon-14, a rare isotope of carbon created largely by cosmic rays, has a half-life of 5,700 years. The carbon in fossil fuels has been buried for millions of years and therefore is completely devoid of carbon-14. Careful laboratory analysis can quantify the reduction of carbon-14 in individual air samples, which in turn reflects the amount of CO2 coming from fossil fuel combustion and cement manufacturing (which also produces no carbon-14). Knowing the location, date and time when the air samples were taken, the research team used a model of atmospheric transport to isolate the fossil CO2 signal and trace it back to sources at the surface.

“This is a new, independent, and objective method for evaluating emission inventories that is based on what we actually observe in the atmosphere,” said lead author Sourish Basu, who was a CIRES scientist working at NOAA during the study. He is now a scientist at NASA’s Goddard Space Flight Center in Maryland.

While the link between fossil CO2 emissions and atmospheric carbon-14 has been known for many decades, the construction of a national-scale emission estimate based on atmospheric carbon-14 required the simultaneous development of precise measurement techniques and an emissions estimation framework, largely spearheaded over the past 15 years by NOAA scientist John Miller and INSTAAR scientist Scott Lehman.

“Carbon-14 allows us to pull back the veil and isolate CO2 emitted from fossil fuel combustion,” said Lehman, one of the paper’s authors. “It provides us with a clear fossil CO2 signal we can track to sources on the ground. We can then add these up and compare to other emissions estimates at various time and space scales. 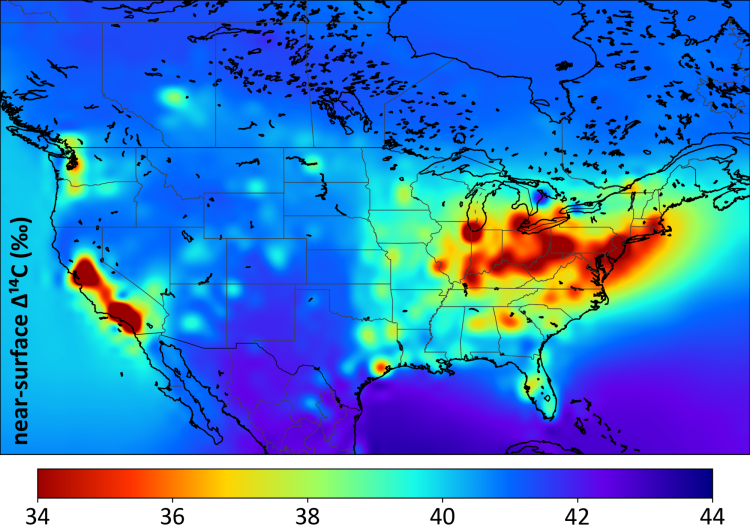 The study team used measurements of atmospheric carbon dioxide and its carbon-14 content to “unmask” the contribution of carbon dioxide from fossil fuel combustion and cement production. Because fossil fuels and materials used to produce cement are devoid of carbon-14, their emissions appear as areas of low carbon-14 (shown in warm colors) that can be traced back to sources at the surface using atmospheric transport models. Figure courtesy of Sourish Basu.

Accurately calculating emissions of carbon dioxide from burning fossil fuels has challenged scientists for years. The two primary methods in current use—“bottom up” inventories and “top down” atmospheric studies used in regional campaigns—each have their strengths and weaknesses.

"Bottom-up" estimates, such as those used in the Environmental Protection Agency (EPA) Inventory of U.S. Greenhouse Gas Emissions and Sinks, are developed by counting CO2 emissions from various processes and fuel types, and then scaling up emissions based on records of fossil fuel use. In contrast, "top-down" estimates are based on measured changes in the concentrations of emitted gases in the atmosphere and wind patterns connecting the surface source regions with the measurement locations.

Bottom-up inventories can provide more information on emissions from individual economic sectors than top-down methods, but their accuracy depends on the ability to track all emission processes and their intensities at all times, which is an intrinsically difficult task with uncertainties that are hard to quantify. Top-down studies are limited by the density of atmospheric measurements and the ability to accurately represent atmospheric circulation patterns but implicitly account for all possible sectors of the economy that emit CO2.

The team constructed annual and monthly top-down fossil CO2 emission estimates for the U.S. for 2010, the first year with sufficient atmospheric samples to provide robust results. As one key point of comparison, they compared their numbers to bottom-up estimates from a recent EPA report of 2010 emissions. The team’s estimate of the U.S. annual total 2010 emission was 5 percent higher than EPA’s central estimate and beyond EPA’s upper 95th percentile confidence limit. The new estimate is also significantly higher than those from other inventories commonly used in global and regional CO2 research, even after adjustment to account for emissions that would be captured by the atmospheric observing network but which are often excluded from inventories, such as in-country emissions from international aviation. On the other hand, the atmospheric results appear to agree with a recent update of the Vulcan U.S. emissions data product developed by researchers at Northern Arizona University. See a news release from Northern Arizona University on the agreement between the two approaches, which use completely different data sources, on the AAAS EurekAlert website.

These figures summarize key findings of the study, showing that the new carbon-14 based estimates of U.S. carbon dioxide emissions are higher than most other estimates. The figure on the left shows annual U.S. emissions for 2010 as reported in this study and from the updated Vulcan emissions data product, the EPA, and three other emission inventories. The error bars are 95% confidence intervals. The figure on the right shows monthly U.S. emissions in 2010 as reported in the study in red (along with associated 68% and 95% confidence intervals). The new results closely match monthly values from the latest release of the Vulcan emission data product, shown as purple dots. Figure courtesy Sourish Basu.

As these were the first estimates constructed using the new observing system, the scientists cautioned that they should be considered provisional. Now they are busy applying the method to measurements from subsequent years to determine if the differences they see are robust over time.

“Independent verification of annual and regional totals and multi-year trends using independent methods like this would promote confidence in the accuracy of emissions reporting, and could help guide future emissions mitigation strategies,” said Miller.

Lehman added, “It was nice to see 2010 totals in the same ball park as some other estimates, but if the difference between our estimate and that from the US EPA of about 5 percent holds up, it is not trivial given EPA’s determination that US emissions have declined only about 10 percent in the decade since. Emissions decreases closer to 40 or 50 percent per decade are what will be needed to fend off the worst consequences of human-caused global warming. We should be in a strong position to monitor progress either way.”

The EPA is tasked with reporting U.S. emissions of CO2 and other greenhouse gases to the United Nations Framework Convention on Climate Change. That obligation stands whether or not the US remains a party to the 2015 Paris Climate Accord.

The study was supported by NOAA, NASA, and the Department of Energy. Other members of the research team included scientists from Northern Arizona University and the University of California at Irvine.

To read the NOAA version of this news release, including implications of this study for regional carbon inventories, visit the NOAA Research website. 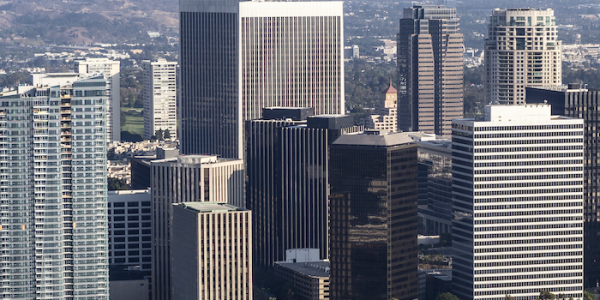 The Los Angeles Basin is often thought of as a dry, heavily developed landscape. But a new study in PNAS led by NOAA and the University of Colorado Boulder shows that the manicured lawns, emerald golf courses, and trees of America’s second-largest city play a surprisingly large role in its carbon footprint. END_OF_DOCUMENT_TOKEN_TO_BE_REPLACED 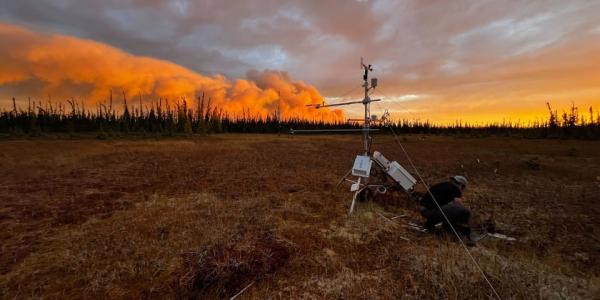 Thawing permafrost—the frozen layer of soil that has underpinned the Arctic tundra and boreal forests of Alaska, Canada and Russia for millennia—is upending the lives of people living in the Arctic and dramatically transforming the polar landscape. The vast amount of carbon stored in the permafrost is an overlooked and underestimated driver of climate crisis. Permafrost thaw gets less attention than the headline-hogging shrinking of glaciers and ice sheets, but scientists say that needs to change—fast. END_OF_DOCUMENT_TOKEN_TO_BE_REPLACED 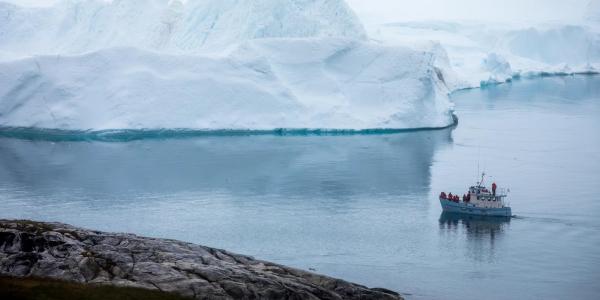 Climate tipping points and the damage that could follow (NPR)

If Earth heats up beyond 1.5 degrees C, the impacts don't get just slightly worse--scientists warn that abrupt changes could be triggered, with devastating impacts. As the 27th annual climate negotiations are underway in Egypt and the world is set to blow past that 1.5°C warming threshold, NPR asks climate scientists including Merritt Turetsky about three climate tipping points--points of no return that could cause big changes to the Earth's ecosystems. END_OF_DOCUMENT_TOKEN_TO_BE_REPLACED
Categories:
Tags: