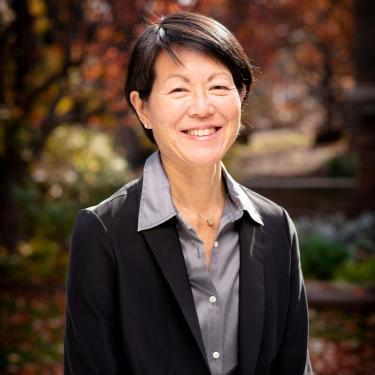 She is the recipient of four University of Colorado awards for excellence in teaching and mentoring, including the 2017-18 Boulder Faculty Assembly Award for Distinction in Teaching and Pedagogy, and the 2011-12 Outstanding Faculty Graduate Advising Award from the Graduate School. From 2016-19 she was Faculty Director of CU’s Graduate Teacher Program, which provides services to improve teacher preparation and professional development for graduate students across the university.

Professor Yonemoto received her B.A. (with highest honors) and her M.A., and Ph.D. in Japanese history from the University of California, Berkeley. Her first book, Mapping Early Modern Japan: Space, Place, and Culture in the Tokugawa Period (1603-1868) (University of California Press, 2003, winner of the American Historical Association’s Pacific Coast Branch Book Prize and the Eugene Kayden Manuscript Prize) is a study of the substantial growth of mapping and geographical consciousness in Japan before the formation of the modern nation-state; her second book, The Problem of Women in Early Modern Japan (University of California Press, 2016), examines how women wielded power under a military-bureaucratic state governed by patriarchal and patrilineal principles. She is also co-editor, with Mary Elizabeth Berry, of What Is a Family? Answers from Early Modern Japan (University of California Press, 2019), a collection of ten essays that utilize a wide range of sources—population registers, legal documents, personal archives, and popular literature—to focus on the variety and adaptability of households and families in a time of transition. Professor Yonemoto's scholarly articles have appeared in The Journal of Asian Studies, Japan Forum, The Geographical Review, East Asian History, the U.S.-Japan Women’s Journal, and other venues. She has received fellowships from the National Endowment for the Humanities, the Social Science Research Council, the Japan Society for the Promotion of Science, the Fulbright-Hays Commission, and the Japan Foundation, and in 2019-20, she is on leave as a fellow of the American Council of Learned Societies, working on her new research project, a history of adoption in Japan from 1700 to 1925.

Professor Yonemoto is accepting both M.A. and Ph.D. students.