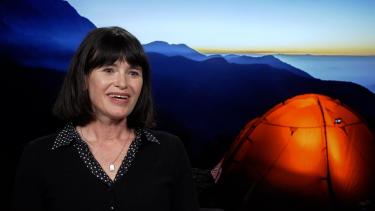 As camping season approaches, we’re reminded of starry nights huddling around a campfire, roasting marshmallows and telling stories. But a CU Boulder professor’s new book encourages those heading to the great outdoors this summer to reflect on the long history of camping and its implications on inclusion, homelessness and protest culture.

Phoebe Young, an environmental and cultural historian in the Department of History, spent over 18 years studying what it means to camp.

In her new book, Camping Grounds: Public Nature in American Life from the Civil War to the Occupy Movement, Young takes a closer look at how camping taps into some of our core American beliefs about nature and citizenship, and why some forms of camping became mainstream over time and others became marginalized.

“Camping can tell us a lot about how Americans connect to nature, but also who has access to outdoor recreation, how different groups experience the outdoors and the ways in which people camp that are not recreational,” Young said. (READ Full article in CU Boulder Today)