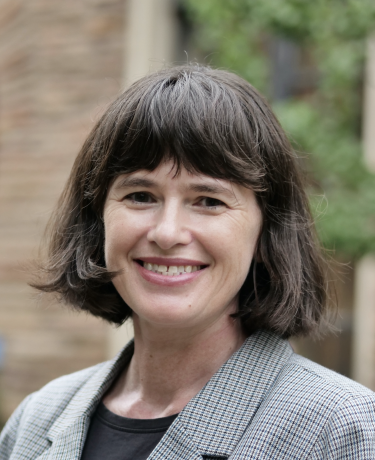 Professor Young focuses on the cultural and environmental history of the modern United States and the American West.

At the undergraduate level, Professor Young teaches courses including "U.S. History since 1865," "Environmental History of North America," "History and Memory in American Culture" and "History of Outdoor Recreation." Her graduate offerings include "Cultural History and Theory," “Visual Culture,” and "Memory and History in Global Perspective." Professor Young seeks to support student learning at all levels and to advance the Scholarship of Teaching and Learning in History. She is the recipient of the 2016 Boulder Faculty Assembly Award for Distinction in Teaching and Pedagogy and the 2020 Award for Teaching with Technology from CU’s Arts & Sciences Support of Education Through Technology.

Professor Young received her B.A. from Bryn Mawr College and her Ph.D. from the University of California, San Diego. Her most recent book, Camping Grounds: Public Nature in America from the Civil War to Occupy (Oxford University Press, 2021), traces the hidden history of camping and the outdoors in American life that connects a familiar recreational pastime to camps for functional needs and political purposes. Camping Grounds was reviewed in The New Yorker in April 2022 and won the 2022 Norris and Carol Hundley Award from the Pacific Coast Branch of the American Historical Association. Her first book, California Vieja: Culture and Memory in a Modern American Place (University of California Press, 2006, published under her previous name of Phoebe S. Kropp), examined public memories of the Spanish past, the built environment, regional development, and race relations in Southern California between the 1880s and the 1930s. She co-edited an anthology entitled Rendering Nature: Animals, Bodies, Places, Politics (with Marguerite S. Shaffer, University of Pennsylvania Press, 2015), including a co-authored introductory essay on “The Nature-Culture Paradox.” She is also co-editor (with Annie Gilbert Coleman) of a new book series at the University of Washington Press: “The Outdoors: Recreation, Environment, and Culture.” She has received multiple research grants, including fellowships from the Henry E. Huntington Library, the Smithsonian Institution, and the American Council of Learned Societies.

Professor Young is accepting M.A. and Ph.D. students, though notes that she will be on sabbatical in 2023-24.

Recent graduates have worked on the history of modern American Judaism and homosexuality, immigrant detention in the Southwest, transnational black consciousness movements in the Americas, and Colorado coal strikes in history and memory.