John O'Loughlin: To Russia With Love

The Majority of Crimeans Are Still Glad for Their Annexation 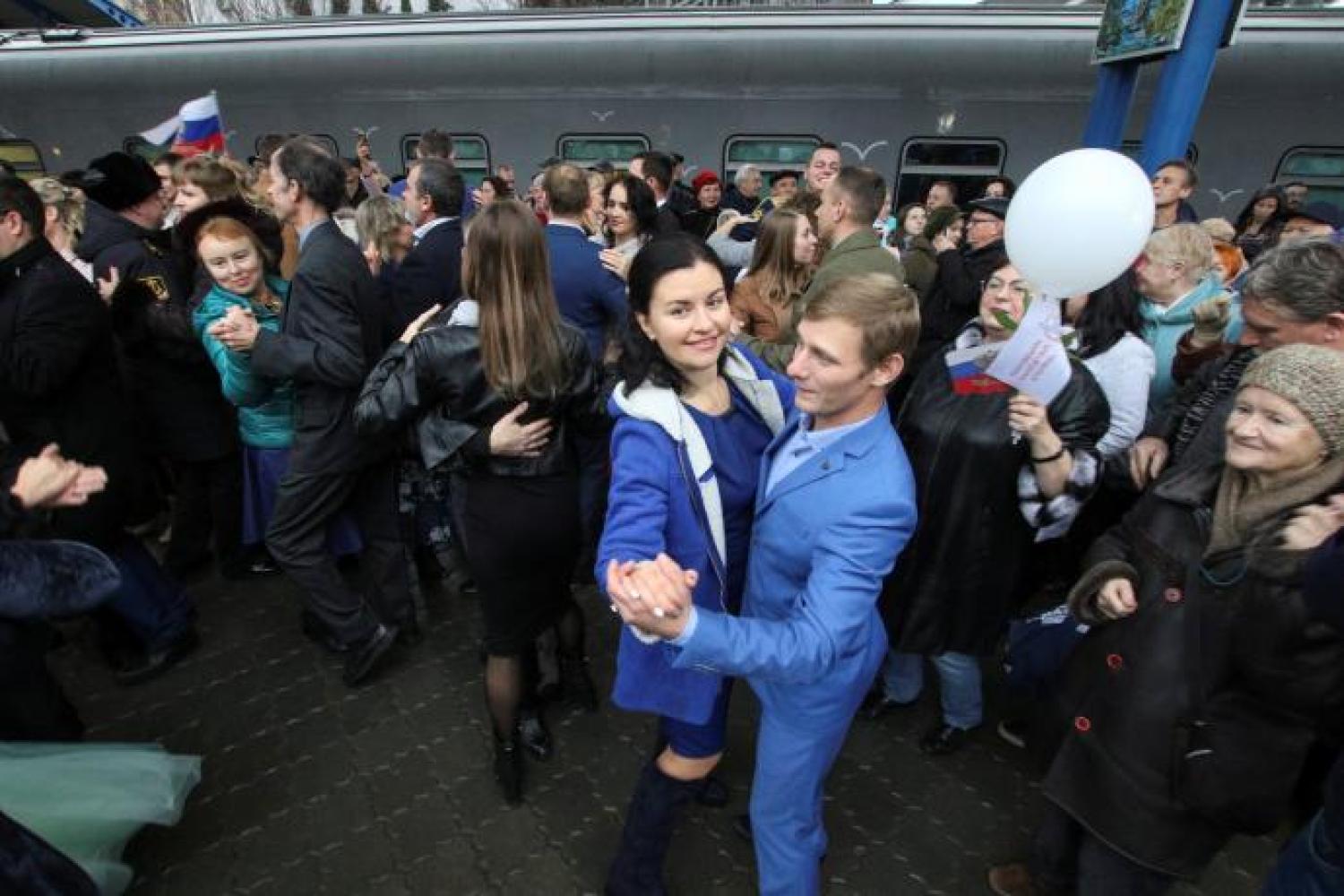 A celebration of the completion of a railway line from Russia in the Crimean city of Sevastopol, December 2019 -- Alexey Pavlishak / Reuters

Six years ago, Russian forces seized the Ukrainian territory of Crimea. Moscow hastily organized a referendum on March 16, 2014, to give the takeover of the peninsula a veneer of legitimacy. According to the official results, 97 percent of Crimeans voted to join Russia. Much of the international community, however, considered the referendum a sham, conducted at the barrel of a gun. In this view, Crimea did not freely join Russia; it was annexed.

Russia and its critics mark different anniversaries to remember this event. Russian officials commemorate March 18, 2014, as the day of “the return of Crimea” to the motherland, when Crimea formally acceded to Russia. Opponents of Russian President Vladimir Putin mourn the annexation of Crimea on February 27, 2014, the day Russian forces launched clandestine operations to seize the peninsula from Ukraine. On that day this year, U.S. Secretary of State Mike Pompeo released a press statement declaring that “Crimea is Ukraine”: “The United States does not and will not ever recognize Russia’s claims of sovereignty over the peninsula. We call on Russia to end its occupation of Crimea.”

Do Crimeans feel that they live in an occupied territory, under the heels of Russian invaders? Some certainly do. International human rights organizations and local activists have documented numerous cases of the suppression of dissent and the jailing of activists belonging to the Muslim minority Tatar population on trumped up “terrorism” charges. Local authorities have raided the homes of suspected activists, crushed independent media, and banned the Mejlis, the most significant Tatar civil society organization. But the perceptions of the bulk of the peninsula’s residents don’t get the same attention in the West as do the reports of dissidents. Our surveys in 2014 and again in 2019 show that Crimeans were and remain mostly in favor of the Russian annexation. That popular sentiment complicates the West’s prevailing view of the seizure of Crimea as an aggressive land grab.

The March 2014 referendum in Crimea was deeply flawed. The vote was rushed in polarized conditions after a military invasion, and those opposed to Russia boycotted the referendum. But it is incontrovertible that most, though certainly not all, Crimean residents welcomed joining Russia. Numerous polls at the time of the annexation and in its immediate aftermath revealed broad support for joining Russia, including one the Levada-Center conducted on our behalf in December 2014. Writing earlier about these survey results, we termed the disconnect between the international community, which saw the takeover as illegitimate, and the people within Crimea, who were generally supportive of the move, as “the Crimea conundrum.” Yes, Russia was heavy-handed and expansionist in its actions in Crimea, flouting international laws and norms. But that did not bother most Crimeans.

Since 2014, Moscow has poured considerable amounts of money into Crimea. With the severing of Crimea’s links to Ukraine’s water, electric, gas, and transportation systems, Russia brought the peninsula into its own infrastructural networks at great cost. Electricity lines now run to Crimea from the Russian city of Rostov, and an underwater gas pipeline runs to Crimea from Krasnodar. Russia’s most ambitious, attention-grabbing endeavor in the region was the construction of a 19-kilometer-long road and railway bridge across the Kerch Strait (completed in 2019), a mega-project that not only visibly connected Crimea to Russia but symbolized the will of the Putin administration to bind Crimea to the motherland. Along with these and other projects, thousands of new Russian residents have come to Crimea, more than a quarter of a million by some estimates. Crimea was the fastest-growing region of Russia in 2019 and has attracted many Russian tourists.

As part of a broader polling project in the post-Soviet states, we asked the Levada-Center to return to Crimea in December 2019 to survey public attitudes there, five years after our initial survey. The 2019 survey consisted of face-to-face home interviews with 826 people, with a response rate of 54 percent. The survey used both direct questions as well as experimental ones that were designed to reach honest and reliable answers on sensitive topics. The proportions by nationality—the common term for ethnicity in post-Soviet countries—in the sample closely correspond to their ratios in the Crimean census of 2014. In our sample, 66 percent of respondents identified as Russian, 13 percent as Tatar—the ethnic Turkic group that makes up about one-eighth of the population of the peninsula—and 16 percent as Ukrainian.

Crimea was the fastest-growing region of Russia in 2019.

In general, Crimea’s annexation in 2014 gave residents grounds for optimism, with a majority of Crimeans hopeful that their lives would change for the better. After five years of development initiatives, more than $20 billion worth of investment from Moscow, and integration into Russia’s infrastructure, have expectations in Crimea changed?

From our survey data, it is possible to compare how Crimeans saw their future in December 2014 and how they perceived it five years later. Interviewees were asked if they expected to be better off after two years. Russians in Crimea harbored high hopes in 2014 (93 percent expected to be better off in two years), but they were somewhat less hopeful in 2019 (down to 71 percent). The proportion of Tatars who indicated that they thought being part of Russia would make them better off rose from 50 percent in 2014 to 81 percent in 2019. Ukrainians in Crimea remained generally optimistic: 75 percent indicated they expected to be better off in 2014, close to the 72 percent who did so in 2019. These generally high levels of optimism across ethnic groups suggest that most Crimeans are pleased to have left Ukraine for Russia, a richer country.

Despite the everyday logistical difficulties involved in breaking away from Ukraine, support for the exit remains undiminished. Approval of the outcome of the March 2014 referendum was still very high among Russians (84 percent) and Ukrainians (77 percent) in December 2019, both unchanged from 2014. Surprisingly, the levels of support for the annexation grew among Tatars, up from 21 percent in 2014 to 52 percent in 2019, although this latter number is about 25 to 30 points lower than for the peninsula’s other residents. This minority group has long harbored a particular resentment and suspicion of Moscow.  In 1944, Joseph Stalin deported all Tatars from Crimea to Central Asia as punishment for perceived disloyalty during World War II. After 1991, their descendants returned to an independent Ukraine but struggled to reclaim their properties and find new livelihoods. It is a measure of the economic advantages of incorporation into Russia that many Tatars have warmed to life under Russian rule. At the same time, many Ukrainians and Tatars—potentially as many as 140,000, according to some estimates—who presumably did not want to live under Russian rule have left Crimea since 2014. 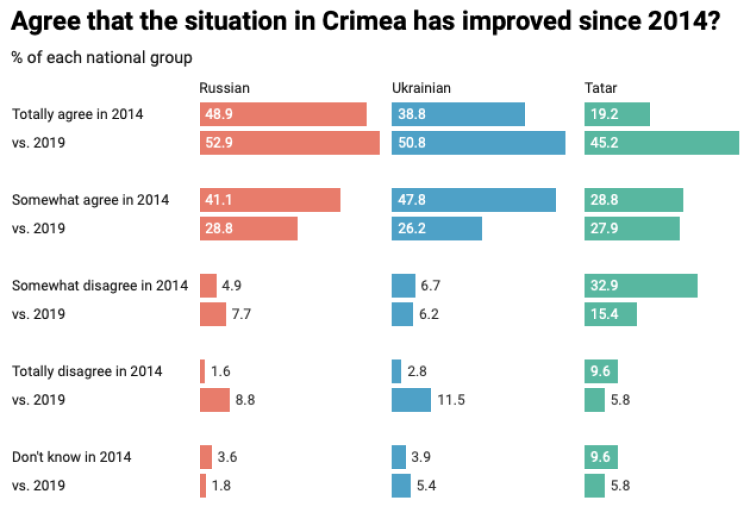 Crimeans are also bullish about Russia’s resilience in the face of external economic pressure. The United States and other Western countries imposed economic sanctions on Russia after its annexation of Crimea. Five years later, concerns about the effects of these sanctions among ordinary residents of the peninsula have eased. In our December 2014 survey, 80 percent indicated that they were worried about the effects of international sanctions. That proportion fell to 54 percent in 2019. Crimeans, like people elsewhere in Russia, appear to have become used to life under sanctions.

An eventful five years have elapsed since our previous survey, but the new data from December 2019 show similar results to 2014 for Russians and Ukrainians in Crimea who agreed that their lives have improved since the annexation. The attitude of the Tatar population, however, was markedly more positive in 2019 than it was in 2014. With a vexed historical relationship with the central rulers in Moscow—thanks in large part to the deportations—Tatars were more pessimistic about their future following the 2014 referendum than were Russians and Ukrainians. But the distance in views between Tatars and others in 2014 narrowed dramatically in 2019. For instance, only 19 percent of Tatar respondents strongly agreed in 2014 that conditions in Crimea were better since Russia took over; in 2019, that proportion rose to 45 percent.

Despite this general goodwill and the positive attitudes toward the annexation, most residents are quick to identify continuing difficulties in the peninsula. In 2014, 73 percent of survey respondents expected “major” or “many” problems in making the transition to join Russia. Five years later, many of those concerns remained. We posed an open question in December 2019 to all respondents, asking them to identify the three biggest problems in Crimea. The consolidated answers are shown in the graph below.

In assessing the problems in Crimea, opinions didn’t differ much across the three main ethnic groups. People in Crimea expressed major economic concerns about low pensions and wages and the continued specter of unemployment. Low government investment in education and health care ranked second overall in the list of concerns. Crimeans also worried about the sustainability of the local economy, inflation, and the slow pace of infrastructural development in the region. At the same time, in response to this open-ended question, Crimeans seemed less concerned with political issues, including the nature of local and national governance, human rights, and relations with Ukraine and other countries. This attitude is in line with sentiments in many other post-Soviet countries, where pocketbook issues take precedence over political ones. 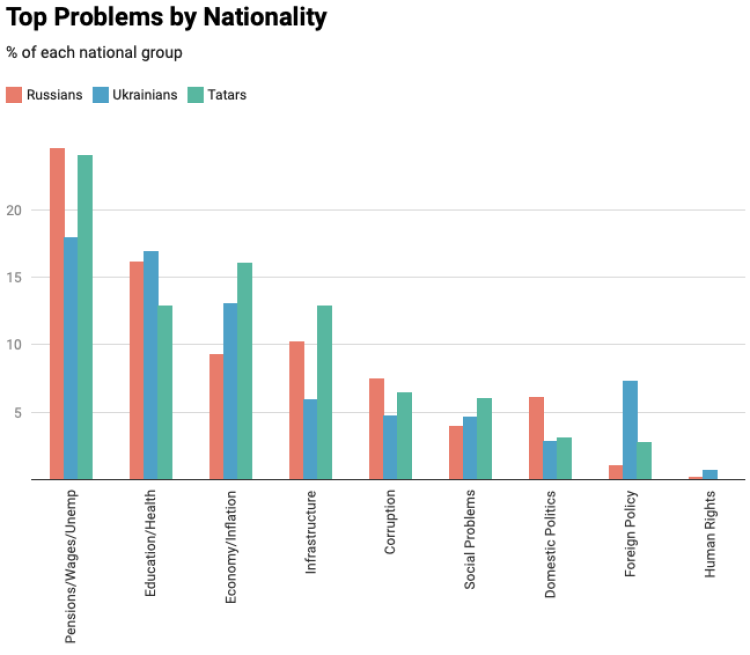 The architect of the Crimean annexation, Putin, gets mixed reviews in our 2019 survey. Putin’s overall approval rating has been declining in Russia over the past few years after peaking in the immediate aftermath of the Crimean annexation; it is now down to 68 percent, according to a Levada-Center national poll conducted in January 2020. Adjusting for any self-reporting bias via an experimental question, Putin’s overall approval rating in Crimea is 55 percent. His ratings are notably higher among Ukrainians (61 percent) and Russians (60 percent) than among Tatars (only 34 percent), suggesting a lingering suspicion of Putin’s government among Crimean Tatars even if they are pleased with changing local economic conditions. Asked directly in 2019 if they trust Putin, 85 percent of Crimeans indicated that they trust the Russian president, exactly the same proportion who indicated that they trust him in 2014.

These survey results should not be interpreted as a refutation of the image of Crimea that Ukrainian activists and advocacy groups present in the West. Recent testimony before Congress painted a grim picture of “life under occupation” in Crimea. There is no doubt that human rights abuses occur in the peninsula. Life is difficult in the territory for activists and those still opposed to the annexation. Corruption remains endemic.

But when Ukrainian activists and Western politicians claim that the residents of Crimea are “living under occupation,” they mistake the experience of some for the experience of all. The majority of Crimeans do not experience Russian rule as oppressive, alien, or unwelcome. Instead, based on the evidence of our surveys, they are reasonably happy to be living in Putin’s Russia.