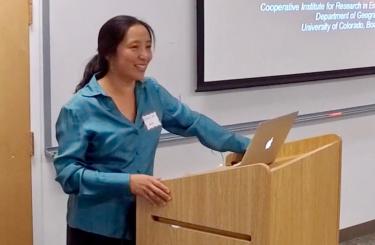 A special Alumni Event to feature and celebrate the work of the Geography department was held on Friday Oct 27 in IBS 155. The event was well-attended by alumni, current students, faculty, staff, and members of the community. Participants were treated to a reception with an hors d'oeuvre buffet, beer, and wine. Emily Yeh kicked off the event. She discussed the department's desire to encourage interaction and build bridges with alumni. She mentioned alumni are always welcome to attend our weekly colloquium series talks and requested anyone offering internships to let the department know of openings. She said it is important to increase awareness of what Geography is and what one can do with a Geography degree for upcoming students. Waleed Abdalati gave a fascinating keynote talk titled “Earth from Space: The Power of Perspective”. Several current graduate students gave exciting IGNITE talks about their research. 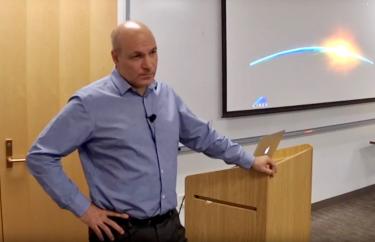 Keynote Abstract: Throughout history, humans have always valued the view from above, seeking high ground to survey the land, find food, assess threats, and understand their immediate environment. The advent of aircraft early in the 20th century took this capability literally to new levels, as aerial photos of farm lands, hazards, military threats, etc. provided new opportunities for security and prosperity. And beginning in 1960, with the launch of the first weather satellite, TIROS, we came to know our world in ways that were not possible before, as we saw the Earth as a system of interacting components. In the decades since, our ability to understand this system has been transformed profoundly by satellite observations, which have helped us not only understand our changing planet in new ways, but also improve our relationship with it.

About Waleed: His research interests integrate satellite and airborne remote sensing techniques with in situ observations and modeling to understand how and why the Earth's ice cover is changing, and what those changes mean for life on Earth. After receiving his doctorate from CU-Geography, he worked as a NASA scientist for 12 years where he was heavily involved in development of NASA's Ice Cloud and land Elevation Satellite (ICESat) and its successor, ICESat-II. He served for two years as NASA’s Chief Scientist, working as principal adviser to the NASA Administrator on science programs, strategic planning, and the evaluation of related investments before returning to CU and joining CIRES (the Cooperative Institute for Research on Environmental Sciences) which he now directs.

IGNITE Presentations:
Waleed Abdalati Keynote: Earth from Space: The Power of Perspective
Tags:
Return to the top of the page