Fiske Planetarium was founded in 1975 with a generous donation from Wallace Franz Fiske, CU alumni.

We will celebrate our 50th anniversary in 2025. We need YOUR support to continue our legacy of developing innovative immersive, educational experiences to engage, inspire, and build community.

Let’s dream big, set ambitious goals, and share in the success - together.

Continue the conversation about giving opportunities by contacting Carla Johns at 303.492.5003. 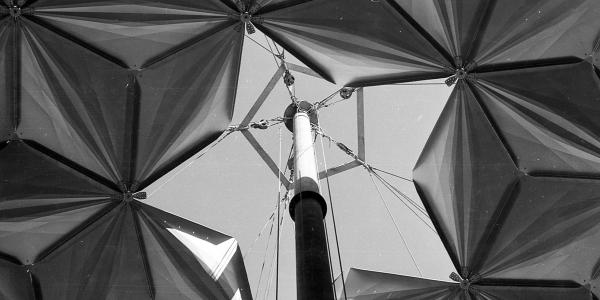 We want to build a future. Help us chart a course for the next 50 years with expanded exhibit space, new immersive technologies, educational fulldome programs, and spaces for exploration and conversation. The possibilities are astronomical. 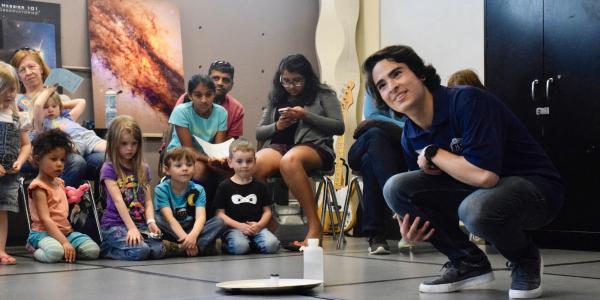 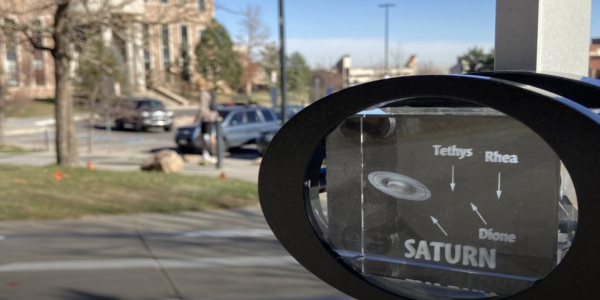 Have you ever wanted to travel to Neptune? Thanks to an updated solar system model on campus, you can “visit” the planet as you stroll from the Fiske Planetarium north to Colorado Avenue—just a few minutes if you hustle. You can also catch the sounds of Neptune and other planets and asteroids as they go whooshing by on your smartphone.

This week on December 8, 2021, Fiske Planetarium and Sommers-Bausch Observatory is unveiling the next generation of the Colorado Scale Model Solar System, plus an associated smartphone app that sets out to “sonify” Earth’s cosmic neighborhood.

The model solar system, which has delighted campus visitors since 1987, squishes space down by about 10 billion times. Earth, which has a diameter of 7,917 miles, is now roughly the size of a pepper grain. You start off near the planetarium where a grapefruit-sized sphere represents the sun, then walk for about a third of a mile, passing exhibits for all eight planets on the way.

Graduate student James Negus helped bring the new model to campus. It’s based on a model developed by the National Center for Earth and Space Science Education called the Voyage Mark II. The installation shows visitors just how big space is, filled with vast distances that are hard for textbooks to capture. CU Boulder faculty members John Keller and Seth Hornstein helped Negus make it all a reality. Read more... 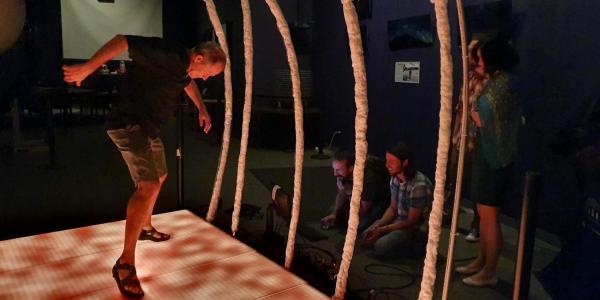 FISKE EXHIBITS LET YOU VISIT THE SUN WITHOUT BURNING YOUR FEET

Visitors to Fiske Planetarium will soon get the chance to feel like they’re walking on the sun.

Next week, the CU Boulder planetarium will debut two new exhibits that explore the inner workings of Earth’s favorite star. They include an installation that lets anyone stroll through a glowing archway made up of coronal “loops”—or the ribbons of blazing-hot plasma that leap from the surface of the sun and can occasionally send solar flares hurtling toward Earth.

The exhibits, which incorporate animations and a lot of LED lights, are the brainchildren of CU Boulder graduate and undergraduate students who worked together across a wide range of fields.

“It was a really great experience to meet people from so many backgrounds,” said Minso Kim, a PhD student in the Department of Critical Media Practices who took part in that effort. “Everyone was so enthusiastic to share their talents.” Read more...

All gifts in support of the university are processed and receipted by the University of Colorado Foundation, a 501(c)(3) charitable entity.