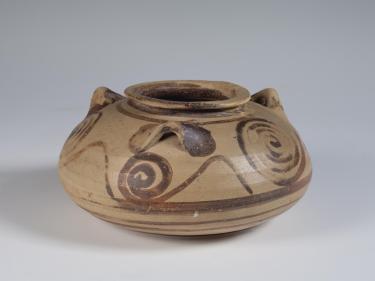 Pottery was produced in Greece as early as the Neolithic period, but the tradition of decorated ceramic vessels in Greece developed more quickly starting in the Bronze Age, a period that began around 3,000 B.C.E. and ended with the collapse of the Mycenaean civilizations around 1,100 B.C.E. On the Greek mainland, the Bronze Age is referred to as the Helladic Period and is divided into three broad phases: Early, Middle, and Late Helladic; the Late Helladic period is alternatively referred to as the Mycenaean period (1). During the Bronze Age, Greece was ruled by independent kingdoms that were probably often in conflict with one another (2). Because we lack substantial written records from this period in history, we rely primarily on archaeological finds, including pottery, to reveal something of the history of Bronze Age Greece.

The Early Helladic period brought new pottery shapes that were used alongside those that had been in use since the Neolithic period. At this time, all pottery was hand-made. An easily recognizable shape, the so-called sauceboat, is one of the most common new shapes, one that was usually plainly decorated with a glossy dark paint. The sauceboat shape may have been derived from metal prototypes or even from the shape of cut gourds (3). Most pottery from this period was either painted in solid colors or decorated with very simple incised designs, as Neolithic pottery had been. The inhabitants of mainland Greece in the Early Helladic period lived in small villages or as farmers and hunters, subsisting mainly on grains, olives, figs, and wild game such as deer. Our evidence suggests that women wove clothing, an important economic role they maintained throughout Greek history (4).

Two major cultural and artistic shifts occurred in the Middle Helladic period. First, foreign invaders, known today as the Minyans, entered Greece and, second, the pottery wheel was introduced. The potter's wheel, which arrived in Greece around 2,000 B.C.E., had been invented about 2,000 years earlier in Mesopotamia (5). As a result of this new technology -- and possibly due to the influence of the arriving Minyans -- a new pottery type evolved from the simple, earlier, hand-made types. The pottery of the Minyans, called Minyan Ware, was an undecorated but highly polished painted ware with a sharp-edge profile that seems to have been influenced by metal vessels (6). Minyan Ware was made on a fast wheel and is found in monochrome gray, such as on a goblet in the British Museum, as well as black, yellow, and red, and it has a distinctive soapy feel. A contemporary pottery style, called Matt-Painted Ware, is different in almost every way. Matt-Painted Ware is decorated with simple geometric designs and, later, more naturalistic motifs. This pottery style may have been introduced by foreigners, as well. In contrast to the fine, delicate fabric of Minyan Ware, Matt-Painted Ware tends toward the coarse and chunky. Despite innovations in pottery technologies and the arrival of the Minyans, life in Greece did not change much during the Middle Helladic period: farmers still tended their fields, hunters pursued the same game, and settlements remained small (7).

The Late Helladic period, also known as the Mycenaean period, was a time of great palaces and their centralized economies in Greece, including at Mycenae, Pylos, and Tiryns (8). The well-known Lion's Gate at Mycenae anticipated future monumental relief carvings and fresco paintings on the walls of palaces betrays an interest in animal motifs and in patterns and movement that will be seen again in vase painting.

Many new pottery styles were introduced in the Mycenaean period (9). Different from the monochrome and simple designs of Middle Helladic pottery was the Mycenaean Pictorial style, which featured human and animal figures, as on a famous example called the Mycenaean Warrior Krater. These vessels, with depictions of real and imagined creatures, marching soldiers, and chariots, foreshadowed later developments in Greek vase painting. The contemporary Close Style was another adventurous experiment, featuring aquatic birds and delicate geometric patterns competing for attention. Despite these innovations in pottery decoration, however, holdovers from the period of Matt-Painted Ware remained, especially at the beginning of the Mycenaean period, when simple patterned and banded pots were common.

Later Mycenaean pottery decoration was influenced by the Minoan civilization on Crete. Minoan pottery, which was decorated with whimsical floral and aquatic motifs, was exported to the Greek mainland (10). The Mycenaeans simplified and abstracted the Minoan motifs and created a more patterned and decorative style than the more naturalistic depictions found on Crete. Common were variations on the Minoan Marine Style, as can be seen on a hydria in the Getty Villa showing an octopus. Not all Mycenaean pottery was decorated, however: a plain, glossy style, called Acropolis Burnished Ware, is an orange-tinted descendent of Minyan Ware (11).

Around 1,100 B.C.E. Mycenaean civilizations collapsed. The reasons for this collapse is debated by archaeologists but, whatever the reason, Greece entered the Iron Age, sometimes referred to as the Dark Ages, although a great deal of excavation, study, and research has brought light into this once-unfamiliar period of Greek history. Depopulation and destruction seem to have characterized the Greek Iron Age and the residents of Greece at this time apparently produced no written documents and only limited amounts of pottery.