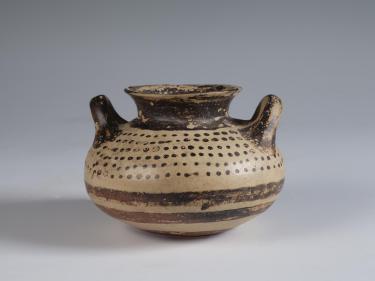 Description: Small pot with rounded bottom, two handles on shoulder, flaring neck and protruding lip. Tan clay with brown slip decoration. Uneven circles ring the base and lower body. The upper body and shoulder are decorated with lines of dots. Handles are covered entirely in brown slip. Base of neck, neck, and inside of mouth covered in brown slip.

Additional photos of this vessel show details of the mouth, handles, and decoration.

This small, two-handled jar dates to the Late Helladic I period, approximately 1,550-1,500 B.C.E. (1). The simple decoration consists of six rows of brown dots on the upper part of the body, with three concentric 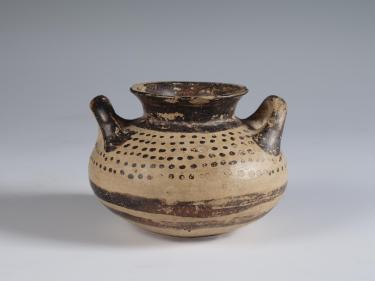 circles beneath; neither the dots nor the bands have been painted particularly carefully. The slip is worn and chipped in many places and appears to have faded in some areas, as well; this fading may be the result of age and wear or a firing error.

This shape, typical of Late Helladic or Mycenaean pottery, is an early form of the taller and thinner alabastron. The alabastron, which originated in Egypt, can be seen in a 6th century B.C.E. example in the CU Art Museum's collection. Alabastra, which are sometimes associated with women, were used to hold bathing oil, perfumed or otherwise (3). Squat jars like this one are sometimes associated with women and are often found in burials; because they were often interred with the deceased, many have survived in relatively good condition. The small size and resemblace to these later vessels suggest its use as a container for ointment or oil. The small handles may have allowed rope or leather to be passed through, allowing it to be suspended from the wrist or another object, which made it portable and easily accessible. The mouth may have been sealed with some sort of lid or wax to keep the contents from spilling. Another possible use for such a small vase is to pour libations for the deceased during a funerary ritual.

The stippled pattern on the upper part of the vessels' body is a feature of pots from the Late Helladic period (4). It has been suggested that the spots may be meant to represent either stone or an ostrich egg (5), in both cases serving to make the simple clay resemble a more expensive or exotic material. Such imitation of costly materials continues throughout Greek art.

A similar but slightly later jar in the CU Art Museum's collection likely had a similar function.