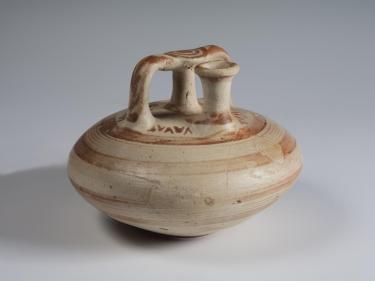 Description: Squat jar with large, round body and shallow convex top. Narrow neck protrudes vertically from top of vessel body, ending in narrow, rounded mouth. In center of top, immediately behind neck, is an upright post to which two handles are attached. Tan clay with red slip decoration. Body decorated with four thick, red bands that create four clay-colored registers, beginning with base; two of these clay-colored registers filled with narrow red bands. Shoulder or top of vase decorated with groups of v-patterns. Base of neck ringed with red slip. Handles painted red. Top of central post painted in bulls-eye pattern.

Additional photos of this vessel show details of its base, top, neck, and decorations.

This squat stirrup jar dates to the Late Helladic IIIA:2 period, approximately 1,374-1,300 B.C.E. (1). The jar is made from a pinkish-buff clay and is decorated with a reddish-brown slip. 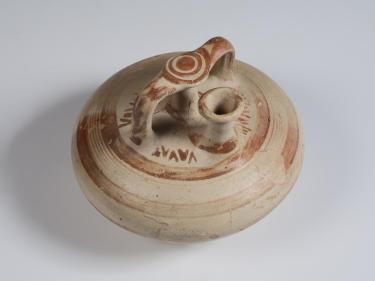