On the leading edge 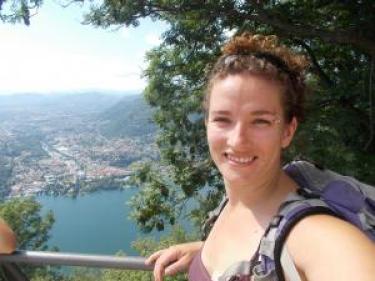 I returned this past weekend from a conference and workshop called Quantitative Laws of Genome Evolution in Lake Como, Italy. An Italian physicist named Marco Lagomarsino created the conference, which brought together an interdisciplinary group of statistical physicists, biophysicists, chemists and biologists to talk about genomics.

My personal research interests lie in understanding horizontal gene transfer in bacteria and its relationship to the development of antibiotic resistance. I talked with many attendees – who were mostly European grad students and postdocs – about my own research on bacterial genome size. But to really understand the talks and lectures, I needed a solid grounding in a broad range of fields.

In that regard, I couldn’t have been better prepared for this conference. IQBiology gave me the background I needed to understand and appreciate almost every seminar for ten jam-packed days.  I had done a project on protein folding for the IQBiology Foundations course, which enabled me to talk with a Danish researcher about his work on metabolic networks. I understood the talks about evolutionary processes in software packages because of my advisor Aaron Clauset’s research about macroevolution – and I spoke with those physicists about their work, how it relates to genetic evolution, and future collaborations. I could converse with biophysicists studying biofilm growth because I had done wet lab work with Bacillus subtilis and watched (and smelled!) my colonies grow wrinkly biofilms. And I was able to engage with researchers studying nucleosome methylation and its potential role in tumor-cell replication, because I understood the nucleosome’s role in transcriptional regulation, thanks to my Statistical Genomics class with Robin Dowell and Manuel Lladser.

Many of the senior scientists at the conference are interested in the next frontier in biology. They asserted that the years 1990-2010 were the era of genomics, and the years 2010-2020 will be the years of  “pangenomics.”  The pangenome describes the whole universe of possible genes that might be available to an organism, and thus the possible functions or traits that an organism might be able to adopt. In bacteria, these can be acquired via horizontal gene transfer or viral transduction. The incredible conclusion thus far is that the entire prokaryotic pangenome may include only one million genes. Sure, that may sound like a lot of genes, but remember that bacteria and archaea have been evolving for 3.5 billion years! This area is just developing, but there was a lot of enthusiasm about how ecology may constrain functional radiations, and the implications for cell immunity – for instance, whether individual cells can combat cancerous mutations or viral invasions.

Even though many of the physicists and chemists at the conference were engaged in theoretical research, most of them saw direct application of their work to medical and societal problems. The talks alternated between models of so-called “fitness flux”, to the philosophy of the origin of life, to new approaches to combating HIV and antibiotic resistance. This is the frontier of science, being navigated by interdisciplinary researchers from all over the world. I am incredibly grateful to the IQBiology program for my interdisciplinary education to allow me to be on the leading edge of the cutting-edge.