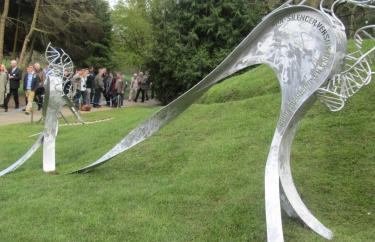 The newly constructed structure in the National Botanical Gardens in Ireland, meant to symbolize the flow of information from DNA to RNA and proteins, contains a representation of the DNA double helix, a ribosome, and thehammerhead ribozyme. Sculptures of the DNA helix have been constructed all over the world; indeed, wandering through Trinity College Dublin a few miles from the gardens I found a double helix sculpture that had been unveiled by James Watson in 2003. Though much rarer, there's at least one previous sculpture of a ribosome, located at Cold Spring Harbor. I can say after some searching, however, that I believe the Ireland National Botanical Gardens contains the first example of a sculpture of catalytic RNA. Ribozymes, hugely important to our understanding of the place of RNA in the universe, had been discovered by Nobel Laureate, BioFrontiers Institute Director, and IQ Biology Foundations class instructor Thomas Cech in 1981, but this appears to be its first manifestation in sculpted form.

My opportunity to attend the unveiling of the scultpure was mostly the result of luck. The sculptor, Charles Jenks, requested a 3D model of the hammerhead ribozyme on which to base his sculpture, and molecular biologist John Atkins, who organized the event asked Tom Cech if he could provide one. Dr. Cech decided it would be a good opportunity for our Foundations class to show off our artistic talents as well as our understanding of RNA structure, a major subject of the course. We divided outselves into teams and competed to see which of us could produce the most accurate representation, with the reward being a trip to Ireland. Building an accurate 3D model from the computer representation in Pymol (a program for molecule visualization) requires spatial skills that I, leaning more towards the theoretical side of biology, do not have. Fortunately, my teammate Zachary Dunlap was much more skilled than myself in this regard, and due to his talent and effort, our final model was deemed the most accurate. Zach and I were invited to attend the unveiling of the statue.

James Watson, who (as you probably know) was one of the discoverers of the structure of DNA, spoke at the unveiling. A major theme of his speech, and the sculpture itself, was the complexity of RNA. Watson said one line which I've thought about quite a bit in the time since (I didn't immediately recognize its significance, so this is my paraphrase): DNA is as much as most people can understand. Understanding RNA makes someone a scientist.

The public has some understanding and appreciation of DNA, but comprehending RNA, and what it does and means, is much harder, in part due to its many biological roles. That's why there are many sculptures of the DNA double helix in the world, but so few of RNA, and why the exhibition in the Botanical Gardens is novel and interesting. This sculpture, comissioned in order to promote understanding of science among the young, includes RNA as well as DNA so as to educate on the many new discoveries involving RNA in the last 30 years. The discovery of ribozymes established that RNA was more than its role in the Central Dogma as passive messenger, transmitting genetic information from DNA to be translated into proteins, the catalytic units of the cell. Rather, RNA is itself an active player: the hammerhead ribozyme can cleave RNA without protein enzymes. Since the discovery of catalytic RNA, we have learned more and more about how RNA is involved in a multitude of functions: information, structure, regulation, catalysis. The multifaceted nature of the molecule is emphasized in the sculpture. Three forms of RNA are placed on top of the ribozyme, over the words: The First Multitasker. It is an appropriate term.

The structure of DNA is aesthetically pleasing, and its discovery a great accomplishment. But I think it was the right decision to put an example of catalytic RNA as the focus of the exhibit, the first structure a person will see walking down the path towards the sculpture. The discovery of Watson and Crick represented the accomplishment of a great scientific goal that had been established as soon as it was understood that DNA was the genetic material. But Cech's discovery is an example of something that, to me, is an even more exciting appeal of science: the potential for an unexpected result to overturn previous knowledge, to add complexity to our old understanding of life and open the path to whole new areas of research, previously unimagined.