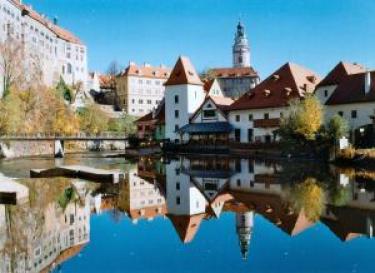 This past January, I had an amazing opportunity to be an instructor at the Workshop on Genomics, and the associated advanced topic sessions, in the Czech Republic. The workshop was hosted in Cesky Krumlov, a UNESCO World Heritage site considered the best preserved medieval town in Europe. The workshop is a two week, intensive crash course on the latest and greatest tools used in genomics, with courses and lectures taught by the developers and researchers sitting at the forefront of genomics research.

For instance, a few of the sessions covered during this past workshop included lectures and tutorials on genome assembly with ALLPATHS-LG and velvet, transcriptome assembly with Trinity and variant calling with Stacks (and that's only scratching the surface). The advanced topic sessions covered R/Bioconductor and Python/BioPython. Students even got familiarity with Amazon's EC2 and cloud computing during the two weeks.

Beyond learning about tools, the workshop offered a fantastic chance to interact with peers within and across disciplines including numerous opportunities for students and invited faculty alike to interact and discuss science over meals and Budvar (the original Budweiser). Furthermore, the diversity of the workshop was immense: over 70 students ranging from graduate level to established PIs, with countless nationalities and languages represented. One of the greatest difficulties as an instructor was becoming familiar with the sheer variety of keyboards!

As an instructor for the workshop, my role was geared towards the setup and testing of tutorials and providing support during the tutorials. The majority of the students taking part did not have a computational background. Initially, many of the questions surrounded a Linux shell environment, but the students were quick to pick up on the common, and powerful, command-line-oriented tasks. During the course of the workshop, a few students began inquiring about Shell programming. We okayed it with the organizer to spawn a few impromptu three-hour practical Python programming sessions that were very well received by the students. For many, it was their first time programming which led well into the advanced topic sessions.

Genomics in the 21st century is becoming increasingly data-driven with the development of next-generation sequencing technologies. Learning how to make sense from sequence within this tsunami of data requires the development of computational skills, knowledge of the tools available and resource requirements. As a current IQ Biology student, I'm enrolled in courses teaching the theory behind many of these tools. The workshop ,in turn, offers the practical hands-on knowledge of how to use and maximize the effectiveness of the techniques; an awesome combination.

If all works out, the workshop will be coming to Biofrontiers the summer of 2013. Hope to see you there!

Daniel McDonald (below in the orange jacket) is currently completing his first year of graduate studies in the IQ Biology Interdisciplinary Quantitative Biology program.