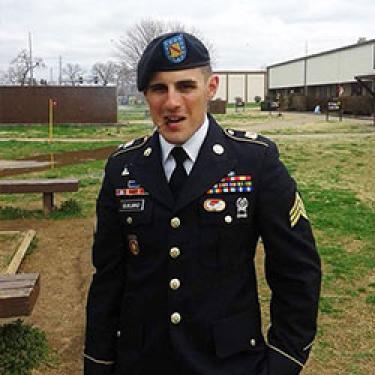 Zach Guiliano is from New York, and in 2011 he joined the Army as an intelligence analyst. Guiliano attended basic training at Fort Jackson, South Carolina and Advanced Individual Training at Fort Huachuca, Arizona. Following his training, Guiliano was assigned to the 101st Airborne Division at Fort Campbell, Kentucky, where he attended Air Assault School in 2012. In 2013, Guiliano was deployed to Afghanistan for nine months under Special Operations Command where he served as an analyst, assisted in the training of Afghan partner forces, and was promoted to sergeant. After the deployment, Guiliano was assigned to the 4th Infantry Division at Fort Carson, Colorado, where he served out the remainder of his contract. Guiliano exited the Army in 2016 and returned to New York for six months. After traveling, Guiliano enrolled at the University of Colorado, Boulder, where he is currently in his fourth year of studying International Affairs. In addition to the IAFS program, Guiliano is minoring in Political Science and is working to obtain a certificate in Western American Studies with the Center of the American West. Guiliano’s academic focus has been primarily related to the Middle East and insurgent/revolutionary theory. When he is not pondering existential, systemic threats within the United States’ political and cultural framework, Guiliano enjoys spending time outdoors with his dog, Hatch, as well as writing and video editing.