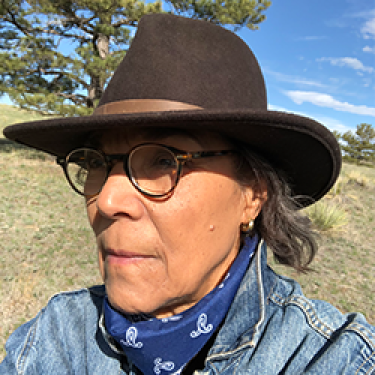 The Reverend Lucía Guzmán was born in Texas to Mexican farm workers. A first-generation Hispanic with a passion for the human rights of all people, she has made a profession out of ensuring fairness and justice for people from all walks of life.

Her mother and father left work in the fields when her father found work as a railroad laborer with the Missouri, Kansas Texas Railroad Company, often called “The Katy Line.” He retired from the railroad after 38 years. He remained, all of his life, a permanent resident alien. Her mother, born in Crystal City, Texas, became a favorite waitress in the small town café where she worked for more than 30 years.

One of Senator Guzman’s greatest personal tragedies was the brutal murder of her 73-year-old father, who was killed in a robbery of the gas station where he worked to earn extra retirement dollars. The loss of her father in this terrible incident shook the community and, of course, her family. Despite this tragedy, she still does not believe in the death  penalty.

One of nine children, Senator Guzman grew up in poverty, and her parents were never able to purchase a home of their own. But her family gained a deep respect among the people in the community where they lived for 45  years.

Despite the financial and social obstacles Senator Guzman and her family faced, she was determined to get an education. She worked her way through college to obtain bachelor’s and master’s degrees, and has since led a career that has taken her down many adventurous paths and earned great respect and admiration from those who come in contact with   her.

She never forgot the hard life her parents suffered, and has always had a strong belief that those   who work hard and play by the rules should have a fair shot at getting ahead. Sen. Guzman believes that everyday Coloradans deserve a trustworthy government that doesn’t cater to the interest of a well-connected few, but does the right thing by everyday Coloradans. She has taken the experiences of her childhood and family concerns and built a solid understanding and respect for all people and the journeys they walk.

Since her election to the Senate in the November 2010 election, she has served as Vice-Chair and Chair of the Senate Judiciary Committee, and has served on the Senate Finance Committee, and the Senate Agriculture, Natural Resources, and Energy Committee. She has also served on the Committee on Legal Services, and currently chairs the Legislative Audit Committee. In 2013, she served as President Pro Tempore and was re-elected to her final term in 2014. She was elected by  her colleagues as the Senate Minority Leader by a unanimous vote on July 15, 2015. She succeeds Senator Morgan Carroll, and is the first openly gay Senate Minority Leader, as well as the first Hispanic person to hold the position.