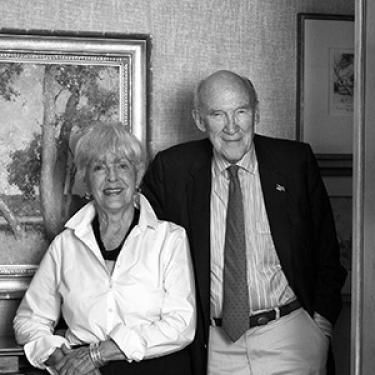 “A sense of humor,” Lorna and Milward Simpson taught Alan K. Simpson and Peter K. Simpson, “is the irreplaceable solvent for the abrasive elements of life.” The elder Simpsons thereby set a regional, national, and world record for success in persuading the next generation to accept topnotch advice and to steer by it throughout their lives. Powerfully reinforced by the recruitment of Ann Schroll Simpson and Lynne Livingston Simpson to the cause, the Simpson Family has forged and led a lasting Western coalition of the goodhearted, the forthright, and the forgiving. Devising a unique merging of merriment with an unflinching recognition of human imperfection, the Simpsons have navigated, in a manner for which the adjectives original and innovative would be understatements, the complicated terrain of a region abundantly supplied with “the abrasive elements of life.” Individually and collectively, the unleashing of their exuberance and generosity—in expanding the reach of their loyalty to and affection for kinfolk—has set an irresistible example of the power of friendship to scramble the divisions of self-interest and partisanship. While one member of the family may have taken a career route that led to greater visibility and audibility, there is no question that the status and stature of Senator Alan K. Simpson arise from and rest on the firmest foundation of family and friendship. In the Simpsonian West, the whole is emphatically greater than the sum of the parts, even as the individual participants in that whole continue to serve their fellow Westerners as high-impact delivery systems for charm, energy, and faith.