Home News The Return of FrackingSENSE with Dr. Anthony Ingraffea

The Return of FrackingSENSE with Dr. Anthony Ingraffea

The Return of FrackingSENSE: What We Know, What We Don’t Know, and What We Hope to Learn about Oil & Gas Development.

With the help of community members like you, the Center of the American West’s FrackingSENSE series returns. These Spring 2015 events bring speakers who offer a unique range of perspectives on Hydraulic Fracturing and Natural Gas and Oil development. 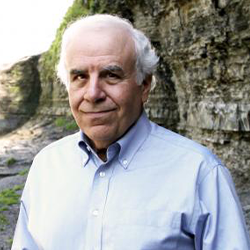 What are the opportunities, challenges, rewards, and burdens presented to university-based academics who enter into the conflict-rich terrain of unconventional oil and gas development? What is the underlying benefit to society when professors make different choices between taking a position or serving as referee on a controversial issue? While this conversation will very much be focused on familiar issues raised by hydraulic fracturing, it will be distinctive, and perhaps unique, in its honest and good-natured exchange of views on the roles professors play in current social, political, and cultural conflicts.

Dr. Ingraffea is the Dwight C. Baum Professor of Engineering Emeritus and a Weiss Presidential Teaching Fellow at Cornell University where he has been since 1977. He holds a B.S. in Aerospace Engineering from the University of Notre Dame, an M.S. in Civil Engineering from Polytechnic Institute of New York, and a Ph.D. in Civil Engineering from the University of Colorado. Dr. Ingraffea’s research concentrates on computer simulation and physical testing of complex fracturing processes. He and his students performed pioneering research in the use of interactive computer graphics and realistic representational methods in computational fracture mechanics. He has authored with his students and research associates over 250 papers in these areas, and is Director of the Cornell Fracture Group (www.cfg.cornell.edu). Since 1977, he has been a principal or co-principal investigator on over $36M in R&D projects from the NSF, EXXON, NASA Langley, Nichols Research, NASA Glenn, AFOSR, FAA, Kodak, U. S. Army Engineer Waterways Experiment Station, U.S. Dept. of Transportation, IBM, Schlumberger, Gas Technology Institute, Sandia National Laboratories, the Association of Iron and Steel Engineers, General Dynamics, Boeing, Caterpillar Tractor, DARPA, and Northrop Grumman. Professor Ingraffea was a member of the first group of Presidential Young Investigators named by the National Science Foundation in 1984. For his research achievements in hydraulic fracturing he has won the International Association for Computer Methods and Advances in Geomechanics “1994 Significant Paper Award”, and he has twice won the National Research Council/U.S. National Committee for Rock Mechanics Award for Research in Rock Mechanics (1978, 1991). He became a Fellow of the American Society of Civil Engineers in 1991, and named the Dwight C. Baum Professor of Engineering at Cornell in 1992. His group won a NASA Group Achievement Award in 1996, and a NASA Aviation Safety /Turning Goals into Reality Award in 1999 for its work on the aging aircraft problem. He became Co-Editor-in-Chief of Engineering Fracture Mechanics in 2005. In 2006, he won ASTM’s George Irwin Medal for outstanding research in fracture mechanics, and in 2009 was named a Fellow of the International Congress on Fracture. TIME Magazine named him one of its “People Who Mattered” in 2011, and he became the first president of Physicians, Scientists, and Engineers for Healthy Energy, Inc. (www.psehealthyenergy.org) in that same year. He is a co-author of recent journal papers on wellbore integrity in Pennsylvania (2014), on methane emissions from shale gas development in Pennsylvania (2014), and on conversion of New York (2012) and California (2014) to wind/sun/water power for all energy uses in the next few decades.