Magnetic Reconnection is one of the most fundamental and important processes in plasmas. It governs magnetic energy dissipation and its transformation into the plasma thermal and kinetic energy, and to nonthermal particle acceleration, and is thus responsible for many of the most spectacular and violent phenomena in space and laboratory plasmas, such as solar flares, magnetic substorms in the Earth's magnetosphere, and sawtooth crashes in tokamaks. Most of the theoretical and numerical models of magnetic reconnection, both collisional and collisionless, are characterized by stationary laminar configurations. However, this is valid only for relatively small systems with only a modest scale separation between the global system size and the relevant microphysical scales. In contrast, many space- and astrophysical reconnecting systems are tremendously large compared with their corresponding microphysical scales, and so the scalings obtained in small-system studies cannot be reliably extended to these systems. In fact, it turns out that the classical steady state reconnection solutions are themselves unstable for large enough systems. The reconnection process for such systems is then inherently non-steady and very dynamic, characterized by the intermittent formation and ejection of secondary plasmoids. CU's Plasma Astrophysics group, In collaboration with Dr. N. Loureiro (IPFN/IST, Lisbon, Portugal), Dr. A. Schekochihin (Oxford, UK), Prof. S. Cowley (Culham, UK), and Dr. R. Samtaney (KAUST), is investigating this very interesting but complex reconnection regime by employing both analytical theory and advanced numerical simulations. 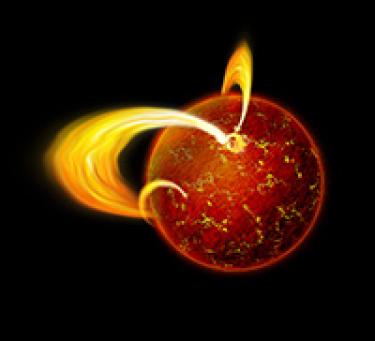 Magnetic reconnection is often invoked to explain the most spectacular and exotic phenomena in high-energy astrophysics, such as the giant flares in Soft Gamma Repeaters (SGRs), releasing about 10^47 ergs in just a fraction of a second in gamma-rays. These powerful explosions are believed to be powered by magnetic dissipation in the magnetosphere of a magnetar --- a class of young neutron stars with magnetic fields of order 10^15 Gauss --- the highest magnetic fields in the Universe. In fact, the energy density of a magnetar's magnetic field is so high that, when dissipated, it inevitably produces a relativistically-hot, optically-thick, radiation- and pair-dominated plasma. The CU Plasma Astrophysics group, in collaboration with Dr. J. McKinney (Stanford), is investigating the basic physics of reconnection in such an extreme high- energy density environment, and the resulting implications for SGR flares and Gamma-Ray Bursts. 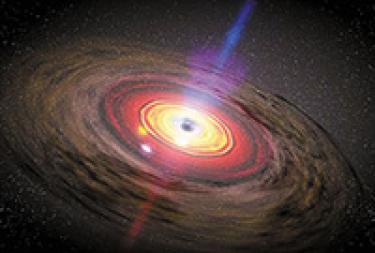 Quasars, Active Galactic Nuclei, and some Galactic X-ray Binaries are powered by the process of accretion --- the release of the gravitational binding energy of the matter falling towards the central black hole. Similar processes take place around accreting neutron stars, white dwarfs, and young stellar objects. Because of its angular momentum, this matter usually cannot fall directly, but instead forms the so-called accretion disk and slowly spirals inward. In order to accrete, the plasma in the disk must gradually shed its angular momentum, and it does so presumably via the effective turbulent transport associated with the Magneto-Rotational Instability (MRI). Based on observational grounds, a fraction of the gravitational energy dissipated in this process is released not in the thin accretion disk itself, but rather in the overlying hot but tenuous accretion disk corona (ADC), believed to be responsible for producing the hard X-ray emission observed in many accretion black hole systems. Understanding how these coronae form and how they work, and, in particular, what factors determine the coronal fraction of the dissipated accretion power, are some of the most pressing questions in modern High-Energy Astrophysics. The CU Plasma Astrophysics group, in collaboration with Drs. K. Beckwith and J. Simon (CU/JILA), is tackling these important problems using sophisticated magnetohydrodynamic simulations and analytical theory.