The plasma and beams group conducts research at the crossroads of plasma physics, particle beam physics, and laser physics. Our goal is to study particle beam acceleration in strong plasma waves that are generated by the passage of a dense particle beam or an intense laser pulse in a scheme known as plasma wakefield acceleration (PWFA) or laser wakefield acceleration (LWFA). The electric fields in a non-linear plasma wake can be as large as ~100 GV/m, exceeding the fundamental limit of sustainable fields inside a conventional metallic accelerator by roughly three orders of magnitude. This implies that high-energy particle accelerators can be reduced in size by roughly and equivalent amount by utilizing PWFA. One result of such favorable scaling could be the dissemination of X-ray free electron lasers (XFEL) across myriad university campuses, providing easy and affordable access to a wide breadth of physics that is currently only available at a small handful of national labs throughout the world. Another long-term goal is the construction of a next-generation, energy frontier lepton collider. PWFA can reduce the size and cost of such a collider, and ultimately extend the energy frontier of terrestrial particle colliders. The plasma and beams group combines efforts in theory, simulation, and experiment to further our understanding and capabilities in the field of PWFA & LWFA, as well as other closely related fields of physics.

Professors Litos and Cary work together to advance the theory describing the nonlinear dynamics involved in PWFA. Using a combination of derivations from first principles and empirical descriptions arising from numerical calculations and simulations, new analytical equations are developed to deepen our understanding of the physics and help design future experiments and applications. 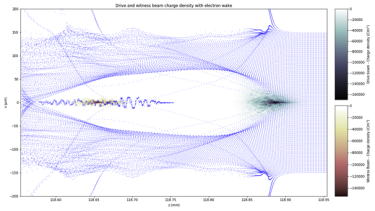 The Plasma and Beams group simulation effort, led by Professor Cary, carries out algorithm development and uses High-Performance Computing to study plasma-based acceleration (both beam and laser driven), nano-scale vacuum devices, and conventional accelerators. Simulation is used to predict and interpret experimental outcomes, as well as to explore regions of parameter phase space that are not easily accessible to experiments. The electromagnetics and plasma computational application VSim, described at https://www.txcorp.com/vsim, is available to students in the Plasma and Beams group. (The computational engine of VSim is the computational application, Vorpal.) VSim comes with a graphical user interface and includes cut-cell, particle-in-cell, and fluid algorithms for studying electromagnetics in the presence of dielectric and metallic structures, plasmas, and fluid flow. VSim is developed by the Boulder-based simulation software company, Tech-X. The simulation software from Tech-X serves not only the CU Plasma and Beams group, but also academic and commercial researchers around the world. 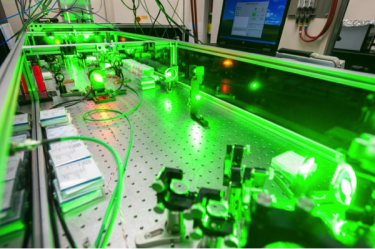 A 10 TW Ti:sa laser system is used to generate the unique plasma sources required for plasma wakefield acceleration. The high-intensity laser pulse is focused by custom designed optics to generate a long focal region that ionizes ambient gas to create specific plasma density profiles that are roughly 50 cm long and 1 mm wide.
Professor Litos leads the experimental efforts of the plasma and beams group. His lab in the Duane Physical Laboratories Complex houses the most powerful laser system on CU's campus (to his knowledge), delivering 500 mJ pulses at a peak power of 10 TW. The laser system is currently used for laser-ionized plasma source development for PWFA. Starting in late 2019, the CU plasma and beams group will utilize their plasma source expertise in experiments conducted at the FACET-II research facility at SLAC National Laboratory. There, our team will work with various collaborators on PWFA experiments that utilize FACET-II's high-energy electron and positron beams, researching such topics as beam emittance preservation, high-brightness radiation production, and positron PWFA.
Return to the top of the page