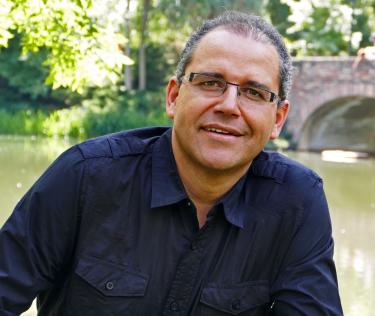 Nabil Echchaibi is Associate Professor of Media Studies and Director of the Center for Media, Religion and Culture at the University of Colorado Boulder. His research and teaching focus on media, religion, and the politics and poetics of Muslim visibility. His work on Muslim media cultures, Islamic modernity, and decoloniality has appeared in various journals and in many book publications. He is the author of Voicing Diasporas: Ethnic Radio in Paris and Berlin Between Culture and Renewal (Lexington Books) and co-editor of International Blogging: Identity, Politics and Networked Publics (Peter Lang); The Thirdspaces of Digital Religion (Routledge); and Media and Religion: The Global View (De Gruyter). He’s currently writing his book: Unmosquing Islam: Media and Muslim Fugitivity. Dr. Echchaibi has also written opinion columns in the popular press, including the Guardian, Forbes Magazine, Salon, Al Jazeera, the Huffington Post, Religion Dispatches, Open Democracy, and Latino Rebels.