The Cosmo-logics of K-pop: Media Intimacies and Populist Soft Power 2019.04.18 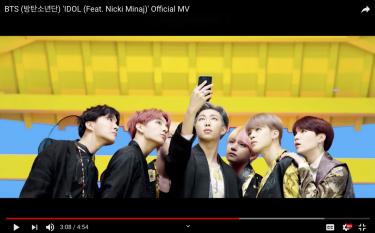 Much of the rising transnational popularity of K-pop today has been correlated to the growth of its digital distribution and consumption. Over and above its status as a genre of music, K-pop is a media phenomenon that pairs transmedia delivery with the cultivation of visible fan communities whose engagements can be registered on globally popular media platforms, especially social networking and video-sharing sites. I call this K-pop’s “cosmo-logic.” This term evokes discourses of globalization, world-making, and cosmopolitanism, yet, more specifically, denotes the operations of South Korean culture industries’ claims to both universal appeal as spectacle and the unique ability to indigenize global culture through creative juxtaposition, adaptation, and repetition. In my analysis of K-pop’s cosmo-logics, I focus on fandom as a particular form of populism in two, somewhat opposed senses, first, in fandom’s assertions of a visual and affective commons and its gift economy and, second, in the resemblance between the affective excesses of fandom and those of the mass or the crowd. If contemporary geopolitics are defined by the rise of various populisms, as many have argued, I propose that media fandoms such as those that have fueled K-pop’s crossover success be understood as part of this zeitgeist.

Bio: Michelle Cho is Assistant Professor of East Asian Popular Culture at the University of Toronto. She's published on Asian cinemas and Korean wave television, video, and pop music in such venues as Cinema Journal, the International Journal of Communication, The Korean Popular Culture Reader, and Asian Video Cultures. Her first book analyzes millennial South Korean genre cinemas, and her current project theorizes the convergence of platforms, affect, and globalization fantasies in K-pop contents and fandoms.