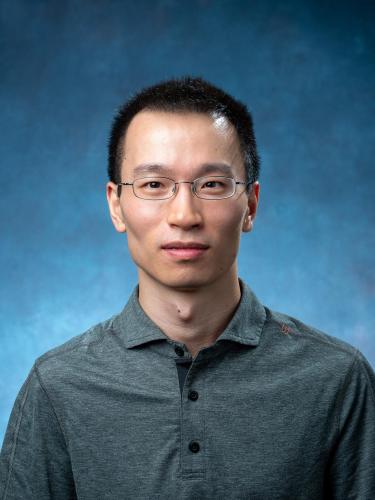 Nearly all species’ genomes are littered with millions of genetic sequences called transposons, which are virus-like parasitic elements that can replicate and spread within host genomes. Collectively, transposon-derived sequences constitute about 50 percent of the human genome sequence, and are believed to have - over tens of millions of years - played a critical role in our evolution. Transposons are increasingly recognized to have influenced human biology and adaptation, particularly in the realms of development and immunity. Transposons may also contribute to disease.

Yuanyuan Xie, a postdoctoral researcher in the Chuong Lab, was recently awarded a National Cancer Center Postdoctoral Fellowship to explore the pathological role of transposon-derived sequences known as retrocopies in colorectal cancer.

For the cell to create proteins, the DNA sequence of a gene is transcribed into RNA, which is then normally translated into a protein. However, cellular RNAs are occasionally reverse-transcribed back to DNA and inserted into a different location in the genome, forming a type of gene duplication known as a retrocopy. Retrocopies originate from the activity of retrotransposons, which replicate by reverse transcribing their own RNA into host DNA, but occasionally capture cellular RNAs by accident. While over 8,000 retrocopies can be detected in the human genome, they are often assumed to be nonfunctional. Nevertheless, genomic studies have revealed that many retrocopies have transcribed RNAs or even translated proteins, often with distinct activities from their parental genes.

Repeat sequences can have deleterious effects in the genome and underlie several human disease conditions including Huntington’s disease, fragile X syndrome, several ataxias, and myotonic dystrophy. To protect against potential harm, all organisms have evolved genomic defenses to repress transposons through epigenetic manipulation. Yet, repression is inherently reversible, and inappropriate reactivation of transposons are common in many cancers. However, the specific cellular functions of retrocopies and whether they play a genome-wide role in cancer progression remain unknown.

Answering these questions is what drew Yuanyuan to the interdisciplinarity of Chuong Lab and the BioFrontiers Institute. “My previous experience was in cell signaling pathways and stem cell models, and I was interested in joining the Chuong Lab where I can learn computational genomics to study gene regulatory networks in evolution and disease,” says Xie.

Taking a break from the bench, Yuanyuan scoured The Cancer Genome Atlas (TCGA), a joint effort between the National Cancer Institute and the National Human Genome Research Institute that has characterized over 20,000 primary cancer and normal samples across a variety of different cancers, in search of candidates where there is increased expression of retrocopies, rather than parental genes, in primary tumors.

Now with the fellowship funding, Yuanyuan will head back to the bench to test his hypotheses. “Through activities like DNA and histone modification, these repetitive elements are derepressed in states like cancer and aging. The question remains whether this derepression is a consequence or a cause,” says Xie.

Looking forward, Yuanyuan plans to extend the analysis to a genome-wide CRISPR screen to identify novel protein-coding and non-coding retrocopies involved in tumorigenesis. Overall these experiments seek to uncover an understudied yet potentially extensive pathological role for retrocopies in colorectal cancers wherein the mechanism may be applied to other types of cancers. These studies may help pave the road for more precise cancer therapies that specifically target retrocopies.