Adapted from The Daily Progress article. 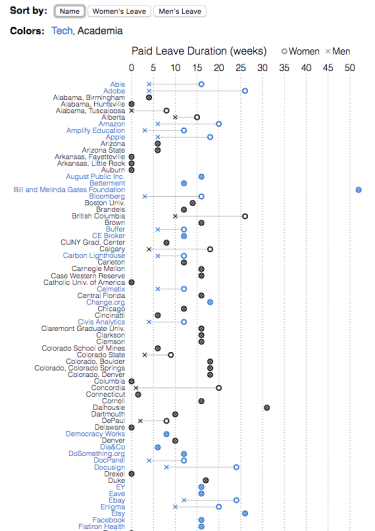 The University of Virginia on Tuesday announced expanded paid leave benefits for new parents — a move that goes beyond a state executive order and one that could help the school remain competitive with its peers.

In January, UVa will expand leave for part-time salaried staff, as well. The expansion bumps UVa up to the nation’s median for paid parental leave, according to University of Colorado researchers.

Now, each parent who is a UVa employee can take time off after the birth of a child or placement of a child under 18 with them as an adoptive or foster parent or guardian. Part-time salaried staff will receive time off prorated to the amount of hours they work — for example, someone who works 30 hours per week will be eligible for six weeks of paid time off.

Previously, UVa employees who were tenured faculty, tenure-track or had a one-year appointment were only eligible for three weeks of leave at full pay after the arrival of a child under the age of 7. Faculty could ask for additional unpaid time off or use short-term disability leave. Staff and other employees appeared to previously be eligible for only the 12 weeks unpaid leave guaranteed by federal law.

“Spending time with a child who just joined your family is incredibly important,” UVa President Jim Ryan said in a statement Tuesday. “Besides giving parents and children a chance to bond, studies have shown that paid parental leave makes children healthier, raises productivity at work and prevents parents from having to choose between taking care of a child and keeping their jobs.”

Virginia Tech expanded its policy to one identical to UVa’s in August.

Nationally, only 5 percent of U.S. workers had access to paid family leave in 2017, according to the Bureau of Labor Statistics. In the public sector, access to paid family and medical leave is spotty. California, New Jersey, Rhode Island, New York, Washington, Massachusetts and the District of Columbia also cover some public employees or cities and counties that opt in.

When Northam signed the order, he said he hoped it would help state employees with young families who previously relied on a federal law that would protect their job while on leave but doesn’t require the time off to be paid.

Some universities have expanded leave on their own, but there is little consistency between which universities offer leave, the amount offered and if it is given to people who are not birth mothers, according to analysis from the University of Colorado at Boulder.

About 60 percent of universities provide paid leave for new mothers or fathers, with an average duration of 14.2 weeks for women and 11.6 weeks for men, said Dan Larremore, an assistant professor of computer science who worked on the project.

“There was a huge amount of variability,” Larremore said. “I would have thought that the more prestigious places would have more of an incentive to treat new parents well, but it was all over the map.”

The group compared its findings about policies in academia with those of tech companies, some of which, such as Etsy Inc. and Spotify Technology, offer as much as six months of paid leave to men and women who become parents. Netflix Inc. offers a full year off.

But of higher importance than the amount of time off, said Allison Morgan, a graduate student who worked on the project, was making sure employees knew their school’s policy and keeping track of how the amount of leave offered might affect hiring, retention and tenure decisions.

The researchers are adding their parental leave findings to a project that looks at how factors such as gender, family makeup and an institution’s prestige interact in academia.

“We’re generally interested in institutional and perceived barriers to participation in the sciences, and one of the barriers we saw was the use of parental leave in the sciences,” Morgan said. “We want to uncover persistent inequities in science, and the data shows there are more disparities than we’d like.”

Ruth Serven Smith is a reporter for The Daily Progress. Contact her at (434) 978-7254, rserven@dailyprogress.com or @RuthServen on Twitter.