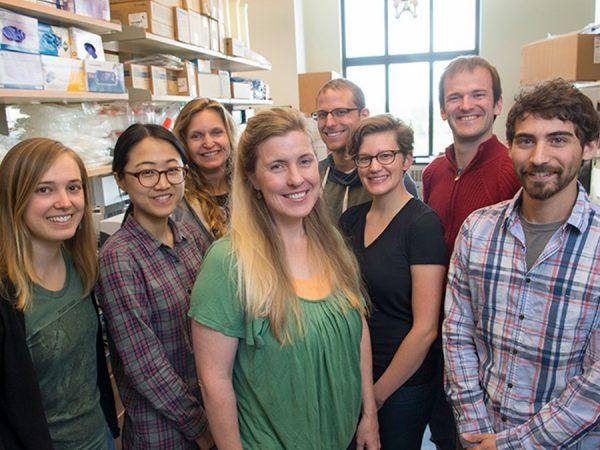 University of Colorado Boulder researchers studying virus spillover have uncovered a clue explaining why dengue viruses reach high concentrations in humans, but not in primates, their presumed natural source. The work was performed by the lab of Dr. Sara Sawyer at the BioFrontiers Institute, and published recently in the journal eLIFE.

Dengue viruses cause disease in approximately 100 million individuals each year. As of yet, no vaccine exists to protect against all human dengue viruses. Dengue is related to yellow fever virus, Zika virus, and West Nile virus, all of which spread via mosquitoes in highly populated areas. Human dengue viruses emerged from primates, yet dengue does not reach high titers in primate populations.

“This paper characterizes one way dengue virus avoids detection by the human immune system. Despite being genetically very similar, small changes that exist between humans and their primate relatives affect the ability of dengue virus to replicate,” said Alex Stabell, a graduate student in Dr. Sara Sawyer’s lab and lead author of the study.

The research shows dengue virus cleaves human STING protein, impairing the body’s immune response. In other primates, dengue does not cleave STING, lessening the pathogenicity of the disease. The authors trace this disparity to residues 78 and 79 in the STING protein, which read ‘RG’ in humans. Monkeys and other mammals have different residues in these locations, causing STING to evade detection by viral proteases. Conversion of these residues to the human-encoded ‘RG’ renders all primate STINGs susceptible to viral cleavage.

“Dengue viruses have evolved to suppress innate immunity in humans in order to increase viral titers and spread,” the authors note. “What we have uncovered is a brilliant method for balancing alternate host species.”

In dense human populations, the cost of severe disease is outweighed by excellent spread. But in smaller animal populations, decreased disease impact allows the virus to use these animals as a long-term reservoir. Thus, dengue viruses have evolved to achieve ideal pathogenesis in both humans and nonhuman primates.

“Hopefully, the species-specific differences we discovered in this paper will help guide further studies, and help us better understand dengue virus replication,” said Stabell. These results will help researchers identify better laboratory animals for studying dengue virus pathogenesis, a crucial step in the development of drugs and vaccines.

Co-authors of the study include Rebekah Gulberg and Rushika Perera of Colorado State University.

The research was supported by the National Institutes of Health, the National Science Foundation, and the Burroughs Wellcome fund.