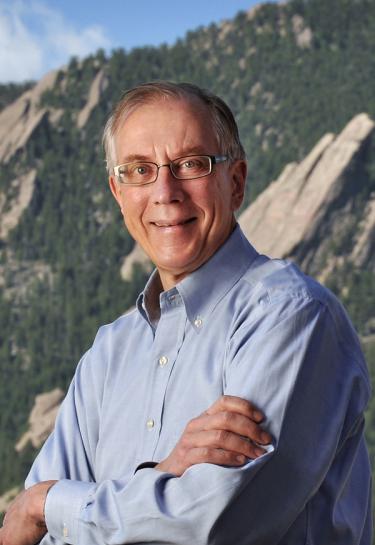 University of Colorado Boulder Distinguished Professor Tom Cech, Colorado’s first Nobel Prize winner, has been named the 2017 Hazel Barnes Prize winner – the most distinguished award a faculty member can receive from the university.

Cech, the director of the BioFrontiers Institute, shared the 1989 Nobel Prize in Chemistry for his findings that RNA in living cells is not only a molecule that encodes information but also can function as a catalyst. His discovery laid the foundation for advances in molecular genetics and gave rise to an expanding appreciation of the roles of RNA in biology.

Cech’s role in teaching is equally impressive. He has routinely taught general chemistry to freshmen, using interactive teaching methods like “clickers” and in-class demonstrations. He includes undergraduate learning assistants to help fellow students master the material as they hone their own teaching skills.

He also led the development of an innovative graduate student education program at BioFrontiers called the Interdisciplinary Quantitative Biology (IQ Biology) Ph.D certificate program. The IQ Biology program currently has 38 active doctoral students who can choose to work with many mentors in 13 departments.

“Tom Cech is one of the leading scientists in the world and has been for many years,” said Chancellor Philip P. DiStefano. “Equally important is his commitment to teaching. Over the years, he has trained and mentored thousands of undergraduates and graduate students, some of whom are now world-renowned scientists themselves. We are truly honored to have Professor Cech, one of our five Nobel Laureates, working among us.”

Since 1992 the Hazel Barnes Prize has been awarded annually to a CU Boulder faculty member who best exemplifies the enriching interrelationship between teaching and research, and whose work has had a significant impact on students, faculty, colleagues and the university.

The prize, which will be presented at spring commencement, includes a $20,000 cash award and an engraved university medal. Cech also will be recognized at a reception next fall that will include former Hazel Barnes Prize recipients, family members, colleagues and students. The prize was established in honor of renowned philosophy Professor Emerita Hazel Barnes, who taught at CU Boulder from 1943 to 1986 and who passed away in 2008.

“I love the fact that the Prize honors the synergy between research and student learning,” said Cech of chemistry and biochemistry. “For me, it’s always been a two-way street: Students contribute greatly to our biochemical discoveries and at the same time the research profoundly enriches their education.”

Cech came to CU Boulder as a faculty member in 1978. Over his CU Boulder career he has trained 54 postdoctoral scientists, 36 graduate students and countless undergraduates.

In recent years Cech has been conducting basic science research on telomerase, the replicating enzyme on chromosome ends that has implications for both cancer and aging. His current research on telomerase reverse transcriptase (TERT), building the framework for the future development of new treatments for cancer.

Cech became a Howard Hughes Medical Institute (HHMI) Investigator in 1988, then served as president of the Chevy Chase, Maryland-based HHMI – the nation’s largest science philanthropy – from 2000 to 2009 while retaining his CU Boulder faculty positions and lab. He is currently an HHMI Investigator and also has a faculty appointment at the University of Colorado Anschutz Medical Campus.

“One of Tom’s top priorities when he returned to the classroom was to continue to teach chemistry to CU Boulder undergraduates because he felt he could make the greatest impact on students if he caught them early and got them excited,” said Distinguished Professor Leslie Leinwand, the chief scientific officer of BioFrontiers.

“He also felt strongly that students should have more opportunities to interact with senior, highly accomplished scientists and was determined to serve as a role model in that regard for other faculty,” Leinwand said.