Scientist develops a new way to look at a cellular shapeshifter 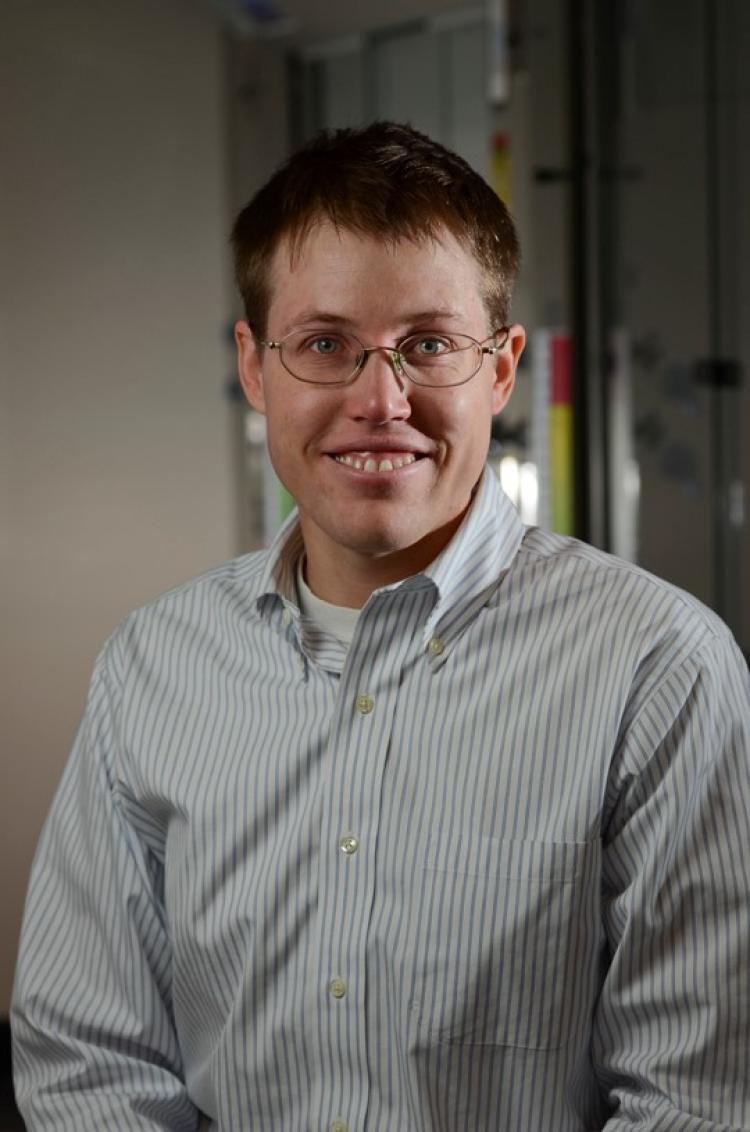 Tubulin, a protein found in your cells, quietly lends itself to many life processes. It sorts itself into long chains, forming tubes that provide scaffolding for living cells. A versatile shapeshifter, tubulin can arrange itself into different structures during different types of cell behavior. Tubulin gained prominence for medical applications when Taxol, a chemical first found in the bark of the Pacific Yew tree, was developed as a treatment for ovarian, breast and lung cancers. Taxol binds to tubulin and makes it hard for the tubes to grow and shrink, preventing cancer cells from proliferating.

“Tubulin is one molecule that does many things in cells,” says Assistant Professor of Physics, Loren Hough, a member of the BioFrontiers Institute. “We're trying to understand how tubulin can play so many different roles."

Hough is focused on the ends of tubulin molecules, called the C-terminal tails. These tails coat the surfaces of the microtubules formed by tubulin. He is studying, in part, how much influence these tails exert on tubulin and its behavior. To answer some of the mysteries of tubulin, Hough developed a method to probe the C-terminal tails of tubulin using nuclear magnetic resonance spectroscopy, or NMR.

Hough wanted to measure how tubulin C-terminal tails influence cellular processes, but to do NMR he had to figure out how to get specific atoms into them first, as part of the isotopic labeling process.  These atoms are easy to incorporate into bacteria, but tubulin cannot be made in bacteria because bacteria lack the suite of proteins that help tubulin fold into its correct shape. Hough brought in a helper: Tetrahymena thermophila. This small but mighty protozoan is common in freshwater ponds and is used frequently as a model organism in biological research. As it turns out, bacteria are a favorite snack of Tetrahymena, so Hough incorporated the isotopes into the bacteria, which were then devoured by the Tetrahymena. With the isotopes digested by the Tetrahymena, Hough was at last able to see the C-terminal tails in action using NMR, as described in a paper recently published in ACS Chemical Biology.

“There is beautiful physics regarding tubulin in general,” says Hough. “I thought the C-terminal tails might be affecting what we know about tubulin from a biophysical perspective. We think tubulin tails are like a knob the cell uses to control different features, but we don't know how the tails are used for this tuning. It’s exciting to be tackling these questions.”

“The MIRA is great. It’s going to give our lab the ability to push this project forward, as well as other research on disordered proteins,” says Hough. “We’re looking forward to taking this work on tubulin C-terminal tails even further over the next five years.”

The Hough lab is part of the physics department's Biophysics group.  At the University of Colorado BioFrontiers Institute, researchers from the life sciences, physical sciences, computer science and engineering are working together to uncover new knowledge at the frontiers of science and partnering with industry to make their discoveries relevant.