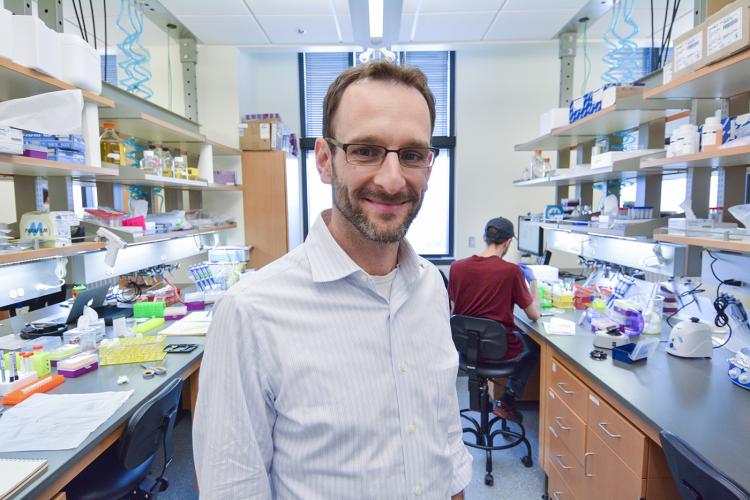 Electric voltage powers life: Our brains use electrical transients to process every thought and every heartbeat arises from voltage changes in heart cells.  Traditional measurements of voltage inside cells involve scientists making tiny wires and impaling cells, exactly the same way you could measure voltage flowing through a copper wire.  However, due to the small size and fragile nature of cells, it has been technically impossible to measure voltage in neurons in a high throughput manner.

Assistant Professor in Molecular, Cellular and Developmental Biology, Joel Kralj, a BioFrontiers Institute faculty member, became interested in measuring cellular voltage as a postdoctoral researcher and developed a protein based sensor that converts changes in voltage to changes in fluorescence, finally bringing to light the electrical changes in cells.

“The fact that we can convert changes in voltage to something visible allows us to make movies showing these biological processes,” says Kralj, “And because it’s really easy to take a movie, we now have a way of collecting vast amounts of voltage data without a physical connection to the cell, which is faster and easier.”

Kralj recently won a New Innovator Award from the National Institutes of Health for his work on voltage in neurons. According to the NIH, the New Innovator Award supports “unusually innovative research” from young investigators like Kralj. The NIH does not award these grants easily, giving out only about 50 per year. The program is meant to support creative researchers doing high risk, high-impact science—a description that Kralj easily matches

As part of this award, Kralj will receive $1.5 million to support his research, and the Innovator Awards allow more flexibility in spending than most grants. He plans to spend the grant money to develop automated microscopy hardware that will be capable of measuring neuronal voltage from hundreds to thousands of conditions. Kralj is joining Andrew Goodwin, assistant professor of Chemical and Biological Engineering, as CU Boulder’s only Innovator awardees.

In order to study neurons Kralj plans to focus on the approximately 20 thousand proteins that transmit genetic information to find out how each protein affects voltage in neurons. This intensive process will involve removing a single protein in each measurement to see how its removal impacts the cell. Kralj will then create a database that includes the effects each of the 20 thousand proteins on the electrical changes in neurons—changes that lead to neurological diseases like epilepsy and Amyotrophic Lateral Sclerosis, or ALS.

“I am hoping that our sensors, and the database we’re creating, will help us identify the full complement of proteins essential for normal function, and also how their absence might give rise to disease. The New Innovator Award is going to give me the flexibility to follow a lead in this research,” says Kralj.