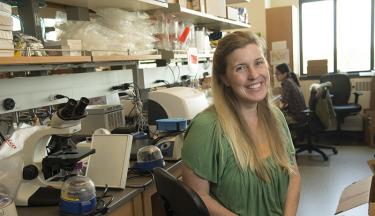 Ebola comes from bats, HIV from primates, and new strains of influenza from birds and pigs. With zoonotic diseases – those capable of transmission from animals to humans – grabbing headlines across the globe, understanding how they work has never been more important.

That’s the mission of a new team of researchers led by Dr. Sara Sawyer at the BioFrontiers Institute. By analyzing the genomes of hosts and viruses alike, Sawyer and her team hope to shed some light on why humans are resistant to most animal viruses, and how animal viruses evolve the ability to overcome these obstacles and infect humans.

One example of the work that Sawyer’s lab does is a project studying how HIV – the virus that causes AIDS – jumped from primates to humans, and why the virus affects humans differently than some primates. 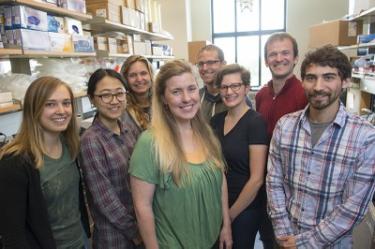 Sawyer’s team, which moved to Colorado from the University of Texas at Austin, works primarily with HIV, dengue (the virus that causes dengue fever) and influenza.

They utilize samples from a variety of primate, rodent, bat and other mammalian species in order to understand the genetic reasons why some species are susceptible and others aren’t.  Genetics may provide the answer to how viruses evolve to infect new species. One of the specialties of this lab is bringing wildlife samples into the lab rather than relying on materials from model organisms (the lab recently received part of a wolf heart in the mail).

The lab, which is housed in the Jennie Smoly Caruthers Biotechnology Building on the CU-Boulder east campus, operates at biosafety level two, which required a substantial retrofit before Sawyer’s team could move in. (The lab does not work with live strains of Ebola, which is highly regulated and requires a biosafety level four lab.)

Sawyer is carving out a niche in the field of virology thanks to her background in evolutionary biology. By applying techniques from evolutionary biology Sawyer hopes to better understand interactions between viruses and their hosts, which could lead to novel methods for preventing future outbreaks. For example, by predicting when and where viruses could transfer to humans, we could implement simple public health measures to protect people – an intriguing prospect given the rapid proliferation of deadly viruses such as Ebola.

“There just aren’t a lot of people doing molecular virology who are also interfacing with nature, and bringing animal samples from the wild into the lab. But, if you are trying to understand where humans are running into these viruses in the natural world, model organisms won’t help you with that,” said Sawyer. “Things can be done to protect people from these viruses, we just know so little about what’s dangerous.”

Sawyer utilizes an evolutionary model called the “host-virus arms race” in her work.  This model says that viruses experience constant selection to better infect and spread in their hosts.  In turn, though, hosts evolve to perfect their immune arsenal against viruses. This tit-for-tat evolution leads to an arms race that is ever escalating, and drives rapid evolution in both the virus and the host genome.

But studying arms races requires lots of genetic sequencing data. “Like every other field, biology is experiencing a revolution where we’re getting instrumentation that can measure things in enormous numbers,” said Sawyer. “Big data has hit biology.”

Sawyer and her team were impressed by Tom Cech’s interdisciplinary vision for BioFrontiers, and think the institute will help their research as well as the career prospects of current and future members of the lab. She has been particularly impressed in the many bioinformatic training opportunities that are offered in the Jennie Smoly Caruthers Biotechnology Building, including the IQ Biology Interdisciplinary Quantitative Biology PhD certificate program.

“Most of the departments hiring new faculty right now are looking for people doing things like next-generation sequencing, systems biology, bioinformatics, and high-throughput biology,” said Sawyer. “The problem is that there aren’t very many trainees out there that meet that job description, yet that’s what many departments are seeking.  I am impressed that Dr. Cech is addressing this problem head-on.”

She believes her team will benefit greatly from training opportunities provided by BioFrontiers, as well as collaboration with other BioFrontiers researchers. Dr. Nick Meyerson, a postdoc in Sawyer’s lab overseeing all of the lab’s projects, agrees.

“Being at an institute like this, where it’s so interdisciplinary, I think it will be very easy to develop new angles on projects and interface with professors that have ideas that we wouldn’t be exposed to anywhere else,” he said.