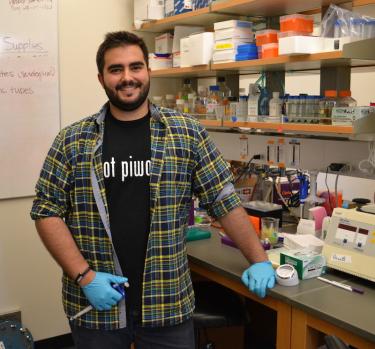 Phil Richardson, an author on a paper recently published in Nature, developed a love for bioinformatics in BioFrontiers' Robin Dowell's lab. His next move: pursuing a graduate degree in medical genomics.

At some point in school, we were taught that humans are a diploid species, made of cells with two sets of chromosomes – one set contributed by each parent. This idea neatly packaged the way we believed cells carried on with dividing themselves and creating more cells, but it isn’t the only way. Polyploidy occurs when cells have more than two complete sets of chromosomes. Polyploids are common: Plants, some fish and amphibians are polyploid. Aneuploidy is yet another chromosomal mix – one where there is an abnormal number of chromosomes in a cell due to extra or missing chromosomes. While being diploid looks much simpler on paper, recent research points to the chromosomal flexibility of the ancestors of many diploid species, because as it turns out, polyploidy and aneuploidy appear to be pretty helpful in smoothing out the evolutionary ride.

In a recent paper in Nature, BioFrontiers Institute faculty member, Robin Dowell, an assistant professor of Molecular, Cellular and Developmental Biology, describes the influence that polyploidy has on accelerating evolutionary adaptation. By studying Saccharomyces cerevisiae, a helpful species of yeast well-known in winemaking, baking and beer brewing, Dowell was able to show that many individual strains can switch between polyploidy and aneuploidy, and they do so to adapt to evolutionary and environmental changes. 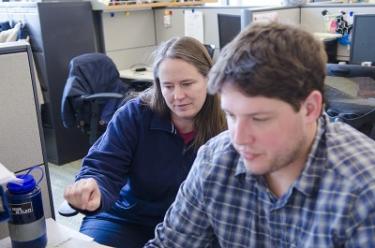 “To me, the interesting thing that came out of this study is that being aneuploid can help polyploids,” says Dowell. “When faced with a lot of evolutionary or environmental pressure, polyploid cells can switch quickly to being aneuploid. It seems like it becomes a short-term solution for these cells.”

Dowell’s lab is, in part, focused on studying how chromosomes influence adaptation and how these adaptations affect cellular processes. These processes are poorly studied because genetic data creates huge datasets and many labs lack the computational tools and abilities to dig through them. Dowell’s lab, in the Jennie Smoly Caruthers biotechnology building, blends a biological wet lab with a computational dry lab resulting in research that has the capability to look deeply at bioinformatics.

Phil Richmond is part of Dowell’s lab and a co-author on the Nature paper. He did much of the groundwork for this research as an undergraduate in the Department of Molecular, Cellular and Developmental Biology at CU-Boulder. His job was to comb through the data of 130 genome-sequenced strains, narrowing the dataset to 78 that were of acceptable quality to study.

“One of my biggest contributions on this project was benchmarking a way to track mutations in the genes,” says Richmond. “Everything was built for humans with a diploid assumption and the current tools couldn’t find mutations in polyploid yeast. This was my first really cool experience in digging into genomics.”

Polyploidy and aneuploidy become interesting study subjects when it comes to cancer. From a cancer standpoint, polyploidy is a mistake in replication of chromosomes, and the odds of a polyploid cell becoming cancerous are increased. Some cancers appear to start when the cell divides and extra chromosomes go into one cell instead of splitting evenly between two. As this happens over and over, a cell can quickly become what scientists call “self-interested” and become a soft tumor.

Genetic sequencing is showing promise as a powerful tool for learning about different types of cancers. Richmond started at CU-Boulder as a pre-medical student and quickly fell in love with biology. Dowell hired him into her lab as a sophomore where he filed papers and washed glassware, but it wasn’t long before Dowell recruited him for a programming project.

“I had never programmed anything,” says Richmond. “But since then, the number of tools available and people that are interested in bioinformatics has grown exponentially, and I’ve been riding that wave ever since. I’m no expert in any of the fields I’ve collaborated in, but my bioinformatics skillset has allowed me to be useful in a lot of different projects. I chose a path that will just keep growing.”

Richmond would love to see cancerous tumors undergo genetic sequencing so that doctors will know what they are treating and how best to treat it. He believes that, although sequencing costs are still relatively high, it might be more cost effective in the long run to sequence a tumor rather than have a patient take the wrong drugs without results.

“This study really brought out one big outlying question,” says Richmond. “When a tumor becomes polyploid, is it the result of some random system, or is it providing an advantage to the cell? We’ve shown that yeast—a eukaryote—is able to adapt faster in the polyploid state, so what we learned is helping us to think of the chromosomal copy number profile in cancer as more of an evolutionary advantage rather than the result of a chaotic and unstable system operating in the cell. This may change the way we approach the treatment of this disease in the future.”