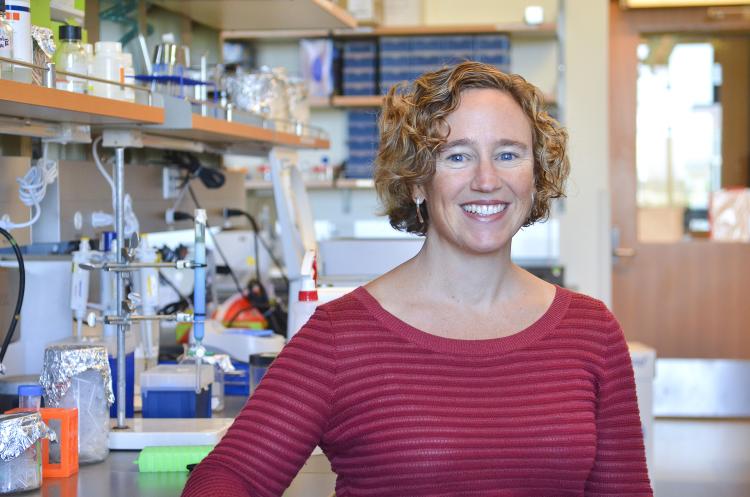 Few people think of metals as being vital to our health. Although most people are aware of iron, zinc is just as important, and is involved in a much wider array of biological functions. Ten percent of the proteins used to build our cells, tissues and genes are predicted to bind with zinc. As humans grew in evolutionary complexity, we adopted zinc as a main ingredient to power the creation of our genome. This metal is involved in the susceptibility to illnesses and infections. A lack of it can cause life-threatening diarrhea, a decrease in the ability to heal wounds and delayed growth and maturation in children.

“As a graduate student, I studied copper, which is also an essential metal that plays important roles in biology,” says Associate Professor of Chemistry and Biochemistry and BioFrontiers faculty member, Amy Palmer. “After working with copper, I started reading about zinc in the brain. As far back as the 1950s, doctors studied zinc-rich areas of the brain, and nobody was sure what it was doing there. Metal ions, like zinc, play such an important role in biology. They are essential…we can’t live without them, but the misbalance of metals is central in many diseases.”

Palmer was recently awarded a Pioneer Award from the National Institutes of Health (NIH), which are given to scientists proposing highly innovative approaches to major contemporary challenges in biomedical research. The Pioneer Award, now in its eleventh year, challenges investigators at all career levels to develop groundbreaking approaches that could have an efficacious impact on a broad area of biomedical or behavioral science. The award will span five years and provide a total of $3.7 million dollars in research funding for Palmer’s work.

“It’s a really enabling award,” says Palmer. “It is intentionally designed to allow you to take your research program in a new and different direction. It lets you do pioneering work that is unlikely to be funded by other research grants. It’s for high-risk, high-reward science, and it will allow us to start an entirely new program.”

Zinc availability is highly dynamic and Palmer is hoping to find out how it functions at a basic level – in the cell. She is investigating the prospect that zinc may be a global regulator of protein function, which may help to explain why zinc is involved in so many cellular processes.  To accomplish this she’ll develop new technology to map the zinc proteome and define how changes in zinc affect gene expression and cellular metabolism.  She hopes to gain an understanding of how zinc changes as certain diseases progress, which may result in biomarkers that could identify illnesses early on in their development. Learning how zinc interacts in the cell may change how we think about cellular regulation and how nutrition affects cells.

Despite the widespread affects of zinc deficiency among humans, it is currently difficult and expensive to test for it in the doctor’s office. The World Health Organization estimates that 30 percent of humans are currently zinc deficient, and as many as 800,000 children die every year because of zinc deficiencies. In fact, zinc supplementation is considered to be as important as providing clean water for the prevention of human death in developing countries. Palmer’s research into this important metal may bring greater understanding as to how it is used by our bodies, and what it can tell us about our health.

"Supporting innovative investigators with the potential to transform scientific fields is a critical element of our mission,”’ said NIH Director Francis S. Collins, M.D., Ph.D. "This program allows researchers to propose highly creative research projects across a broad range of biomedical and behavioral research areas that involve inherent risk but have the potential to lead to dramatic breakthroughs."