CAREER scientist thrives at the intersection of research and teaching 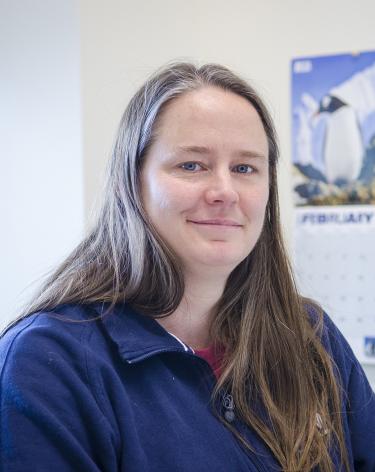 Most university faculty divide their time between research activities, teaching and service to their institutions, sometimes putting in hundreds of hours weekly to accomplish the job’s demands. Being able to shine in all of these areas is a rare accomplishment, especially for newer faculty. For BioFrontiers faculty member Robin Dowell, juggling these responsibilities is somewhat second nature.

“With respect to components of academia, I firmly believe that these are difficult to separate,” she says. “The best way to deeply understand scientific concepts is to get your hands dirty— actually perform an experiment, write a program, or solve a math problem — or to teach the concepts to someone else. In the best-case scenarios, you do both.”

Her ability to apply this philosophy recently earned Dowell the National Science Foundation’s most prestigious award for junior faculty, the Faculty Early Career Development (CAREER) grant. Providing five years of support totaling more than $650,000, the grant recognizes emerging investigators who excel at combining teaching and research in ways that directly impact their institutions and the broader community. Dowell is one of only ten scientists nationwide in the field of molecular and cellular bioscience who have received the award so far this year.

The CAREER program requires scientists to complete specific aims in both teaching and research.  Successful candidates have designed projects in which their research feeds into their teaching goals and vice versa, creating a long-term cycle that advances both aims. Projects are also expected to meet institutional needs, such as providing students with mentored external development opportunities or promoting interdisciplinary research.

Dowell prefers the term “antedisciplinary” in her lab’s approach, a term coined by her graduate mentor, Dr. Sean Eddy. Given her and her students’ concentrations in computer science, statistics, molecular biology and genetics, she defines the concept as “following problem wherever it leads you.”

“I have a hard time when people ask me how I integrate such diverse fields,” she says. “It isn't about integrating fields, areas or components, but rather ignoring those kinds of boundaries.”

The CAREER project embraces this philosophy by providing two unique educational activities for students while furthering the Dowell lab’s continuing research on the molecular impact of aneuploidy. Down syndrome is a well-known example of aneuploidy, which occurs when a person has more copies of a chromosome than normal.

Using computational models of biological processes and experiments on yeast cells, the Dowell lab will explore how regulators—genes that affect the function and form of other genes— affect the early processes of genetic expression, called transcription.

Dowell describes her research in musical terms. If the human genome is the score for a symphony, transcription is like the music heard from that score. In genetics, a regulator gene performs the work of the musical conductor, controlling qualities such as tempo and volume. 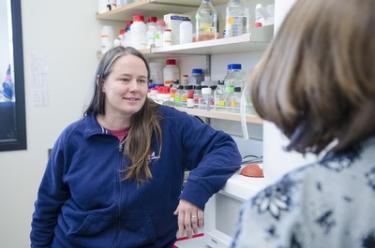 While regulators in the human genome number about 1,800, having too many of these conductors in a particular cell can throw off the music. Aneuploidy is an example in which the dose of regulators has altered expression of genes, causing deleterious affects for people with Down syndrome.

“We understand that transcription is affected by aneuploidy, but we don’t know how it works at the molecular level,” Dowell says.

The educational component of project contains two unique objectives that encourage students to engage in external opportunities that contribute to their education and community. The first objective is to establish a permanent iGEM team at CU. iGEM, or international Genetically Engineered Machine, is the world’s foremost synthetic biology competition for undergraduates. Last year’s CU team won the gold medal at the North American competition for their “DIY Biology” project to create a set of low-cost tools for performing synthetic biology.

The second objective is to better engage scientists in understanding Responsible Conduct of Research (RCR) by creating an interactive game. RCR encompasses professional norms and ethical principles scientists must use in the performance of their work.

“The game will not only train scientists in an engaging and interactive manner but also will enable studies into how peer pressure influences ethical behavior.” Dowell wrote in her CAREER grant application. “In the end, the long term impact of creating honest, intelligent and creative scientists is incalculable.”

More information on antedisciplinary research, iGEM and aneuploidy can be found on the Dowell Lab website.