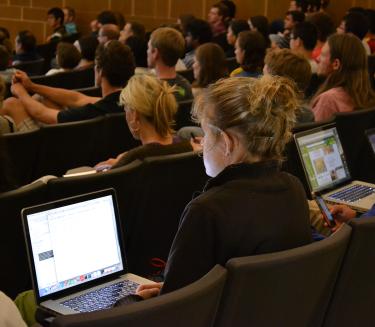 It looks a lot like the other buildings on the CU-Boulder campus, with its rustic Italian-inspired tile roof and red brick, but the Jennie Smoly Caruthers Biotechnology Building (affectionately known by its inhabitants as JSCBB) is something quite different. It was designed to support those scientists and engineers whose research was driving them into other academic areas, and who wanted to use the best tools from other disciplines to do their work. This building houses engineers, biologists, chemists, biochemists, computer scientists and physicists. These are the CU faculty that speak “interdisciplinar-ese”. 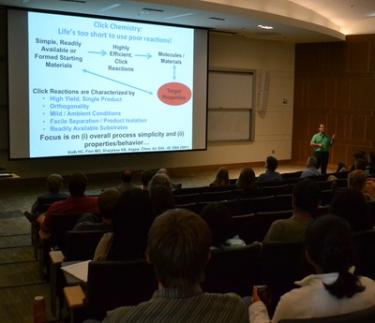 In a building where a biochemist can have barbecue with a biofuels expert, good ideas are bound to proliferate. The challenge is getting these dedicated researchers away from their labs and talking to each other. It takes conversation to initiate collaboration. To help this process along, the JSCBB Mini Symposium was born.

The JSCBB Mini Symposium took place on July 29 with 15 faculty members presenting on topics that spanned from biomarkers for cancer, to tissue engineering, biofuels and the microbiome. Faculty members represented the groups in the JSCBB: the BioFrontiers Institute, the Division of Biochemistry and the Department of Chemical and Biological Engineering. JSCBB’s Butcher Auditorium was packed for all five sessions throughout the day.

“It’s sort of like being at an international conference. We’re hearing all these great talks and listening to incredible talent,” says BioFrontiers Institute Director, Tom Cech. “The best part is that we never have to leave the building.”

Talks during the day highlighted just how broad the research is at JSCBB. Ryan Gill, an associate professor in the Department of Chemical and Biological Engineering detailed the challenges of creating the genome of new bacteria that could break down biomass and turn it into biofuels. 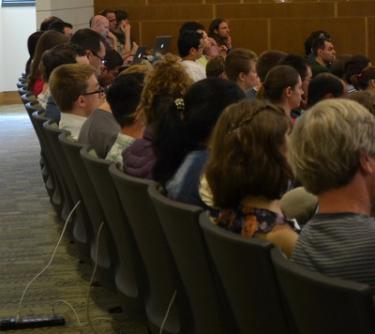 These bacterial helpers have to be resistant to invaders, tolerant of solvents and good at breaking down cell structures. This work piqued the interest of BioFrontiers’ Rob Knight who is an associate professor of biochemistry studying the bacteria, fungus and viruses that populate the human gut, skin and mouth. These researchers, who have collaborated before, will likely meet up again on this challenge.

BioFrontier’s Tom Cech explained the importance of telomerase in the health of human cells, and its role in cancer. During a question session after his talk, BioFrontiers Chief Scientific Officer Leslie Leinwand mentioned that there are virtually no cancers that attack heart muscle tissue, one of her specialized areas of study.  “Has anyone studied the telomerase in that tissue?” she asked.

Cech paused momentarily, thinking and replied: “Not that I know of. But we could do it,” he said…hinting at the possibility of a future collaboration between the two.

If the goal of the JSCBB Mini Symposium was to get these talented scientists and engineers communicating with one another, it was successful. Faculty members caught up with each other during the lunch break and reception. In addition, students had free reign to ask questions about the information they had seen during the event. Probably the best measure of success of this event is the desire by these very busy researchers to do it again—a goal that was more than met.

“This will be one of many,” says Distinguished Professor of Chemistry and Biochemistry, Marv Caruthers. “It’s something we should do twice a year…or maybe more.”

BioFrontiers Scientist Tackles a Childhood Disease of the Heart