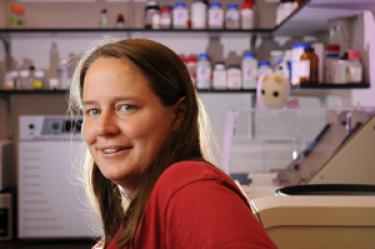 Robin Dowell understands machines of all kinds. The MCD Biology assistant professor and BioFrontiers faculty member has been restoring old cars since she was 14 years old. She rebuilt her first engine with her dad, who is a petroleum engineer. It was a 1977 Mercury Monarch and she drove it throughout high school.

After high school she rebuilt a 1976 Ford F150 truck and drove it to college, earning a double bachelors degree in the unlikely combination of computer engineering and genetics. She then went on to get a master’s degree in computer science and a doctorate in biomedical engineering. She still owns the truck.

“Cars are simple machines. If you have a really good mechanic, you can go from a single noise in the engine to a diagnosis.  For example, a bad mechanic will see electrical problems and just replace the battery or maybe the whole alternator.  You'll be back in two months or less with more electrical problems," she says. “Good mechanics can tell when it is the alternator failing and just replace the brushes or if the problem is actually due to some faulty wiring somewhere in the system.  We need that ability to look at a symptom and follow it to the core problem.”

Dowell believes that part of the solution is in the genotype and phenotype of each person. Your genotype is the catalog of genes that build everything about you. Your phenotype is how you look, how you are put together, and to some degree, the kind of behaviors you exhibit.

In 2001, the Human Genome Project was completed after more than 1,000 scientists worldwide sifted through 3 billion bits of data in each human cell to map the ordering of all human genes. You have about 20,000 genes in a unique combination that makes you, you. Every time a baby is born, a new genome is created.

With all our newfound knowledge of the genes and how they influence our phenotype, scientists are eager to apply this to predicting disease in humans: if you have a specific gene combination, you are likely to get a specific disease. It turned out that it wasn’t that easy.

In 2009 Dowell and a team of scientists got up close and personal with Saccharomyces cerevisiae— a type of yeast best known for its starring role in the fermentation process of bread and beer. They sequenced the genome of a new individual strain of the famed fungus and narrowed their focus on only the genes required to keep the organism alive. As they were getting closer to narrowing down what kept the yeast alive, they were also getting further away.

Dowell and her team discovered that genetic sequencing made up only part of the roadmap to understanding each individual. It was also very complex genetic interactions across the entire network of genes that influenced phenotype: the same mutation in different individuals created different phenotypes because of unique interactions across the network.

“The genome gave us a parts list,” says Dowell. “Now we’ve realized that there is much more to understanding a genome than a simple parts list.”

It seems like not such a big deal when you are talking about yeast, but when you apply this to how drugs interact in individual humans, it becomes a bigger issue. The human condition becomes a moving target with constant mutations at a genetic level that affect the phenotype of each individual. Designing drugs that work effectively for all people, without killing any of them, becomes nearly impossible.

Dowell’s vision is to one day understand how genes influence disease susceptibility—a likely insurmountable goal for anyone but someone with her background in computer science and genetics. Like the Mercury Monarch engine she restored in her teens, she wants to be able to listen to the engine and know that it is not just the alternator that is going bad.

“That is what we’re missing in medicine right now,” she says. “We want to get to a mechanistic understanding of human beings. And to get there we have to know that it is all connected.”

You can read Robin’s paper, Genotype to Phenotype: A Complex Problem here.