In a new paper released today in Nature, BioFrontiers Institute scientists at the University of Colorado in Boulder, Tom Cech and Leslie Leinwand, detailed a new target for anti-cancer drug development that is sitting at the ends of our DNA. Researchers in the two scientists’ laboratories collaborated to find a patch of amino acids that, if blocked by a drug docked onto the chromosome end at this location, may prevent cancerous cells from reproducing. The amino acids at this site are called the “TEL patch” and once modified, the end of the chromosome is unable to recruit the telomerase enzyme, which is necessary for growth of many cancerous cells.

“This is an exciting scientific discovery that gives us a new way of looking at the problem of cancer. What is amazing is that changing a single amino acid in the TEL patch stops the growth of telomeres. We are a long way from a drug solution for cancer, but this discovery gives us a different, and hopefully more effective, target,” said Cech. He is the Director of the BioFrontiers Institute, a Howard Hughes Medical Investigator and winner of the 1989 Nobel Prize in Chemistry. 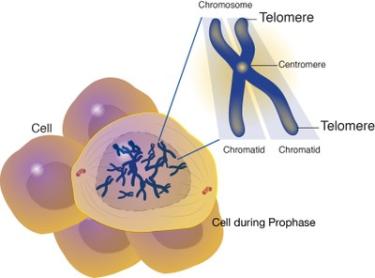 Telomeres have been studied since the 1970’s for their role in cancer. They are constructed of repetitive nucleotide sequences that sit at the ends of our chromosomes like the ribbon tails on a bow. This extra material protects the ends of the chromosomes from deteriorating, or fusing with neighboring chromosome ends. Telomeres are consumed during cell division and, over time, will become shorter and provide less cover for the chromosomes they are protecting. An enzyme called telomerase replenishes telomeres throughout their lifecycles.

Telomerase is the enzyme that keeps cells young. From stem cells to germ cells, telomerase helps cells continue to live and multiply. Too little telomerase produces diseases of bone marrow, lungs and skin. Too much telomerase results in cells that over proliferate and may become “immortal.” As these immortal cells continue to divide and replenish, they build cancerous tumors. Scientists estimate that telomerase activation is a contributor in up to 90 percent of human cancers.

To date, development of cancer therapies has focused on limiting the enzymatic action of telomerase to slow the growth of cancerous cells. With their latest discovery, Cech and Leinwand envision a cancer drug that would lock into the TEL patch at chromosome ends to keep telomerase from binding there. This approach of inhibiting the docking of telomerase may be the elegant solution to the complex problem of cancerous cells. Cech, a biochemist, and Leinwand, a biologist, joined forces to work on their latest solution.

“This work was really made possible by the fact that our labs are so close. My lab was able to provide the cell biology and understanding of genetics, and Tom’s lab allowed us to explore the biochemistry. We have a unique situation at BioFrontiers where labs and people comingle to make discoveries just like this,” said Leinwand. She is the Chief Scientific Officer of the BioFrontiers Institute and a professor of molecular, cellular and developmental biology.