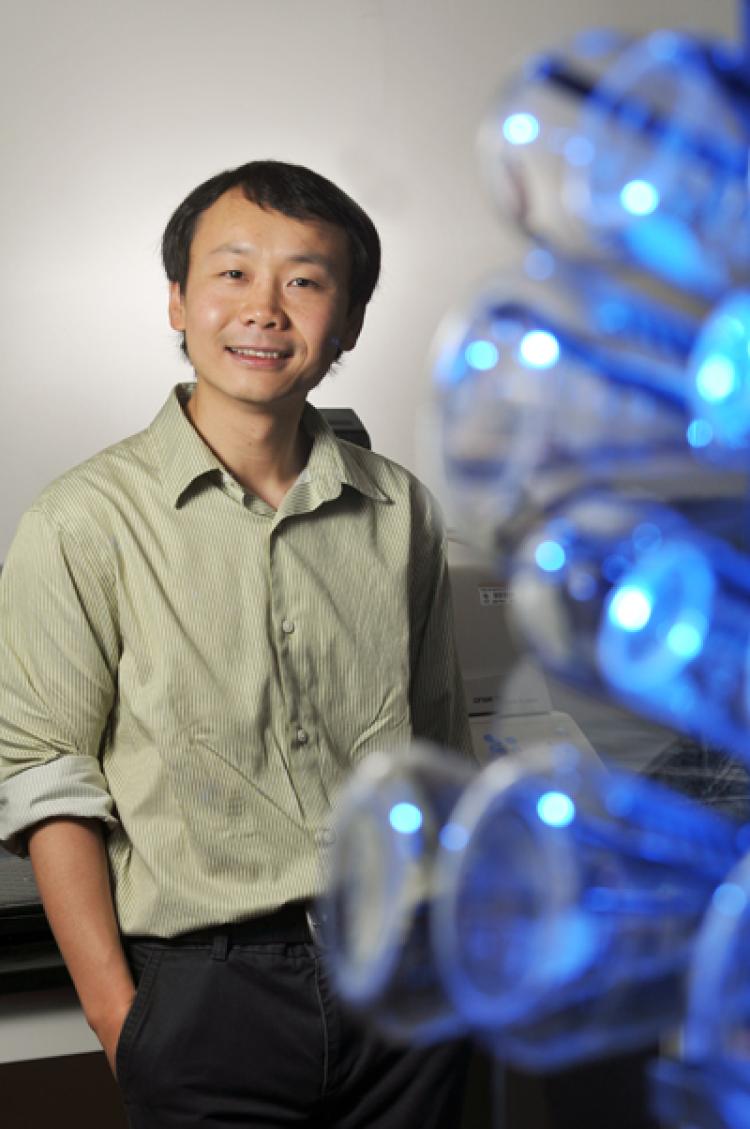 A University of Colorado Boulder-led research team has discovered that two protein receptors in the central nervous system team up to respond to morphine and cause unwanted neuroinflammation, a finding with implications for improving the efficacy of the widely used painkiller while decreasing its abuse potential.

Scientists have known that a particular protein receptor known as toll-like receptor 4, or TLR4, helps to activate inflammation-signaling pathways to attack foreign substances like bacteria and viruses, said Biofrontiers Institute faculty member and CU-Boulder Assistant Professor Hang “Hubert” Yin of the chemistry and biochemistry department.  The new study showed opiod analgesics like morphine also trigger such neuroinflammation by first binding to an accessory protein receptor known as a myeloid differentiation protein receptor 2, or MD-2, which then works in concert with TLR4 to respond to morphine in the central nervous system, said Yin, who led the study.

The new findings should help researchers develop new drugs not only to increase the effectiveness of medical opiates like morphine by preventing neuroinflammation that enhances pain by increasing the excitability of neurons in the pain pathway, but also to influence the TLR4/MD-2 protein complex in a way that may help prevent drug abuse.  Such pharmaceuticals could be designed to decrease side effects like tolerance, dependence and addiction not only in opiates, but in methamphetamines, cocaine and even alcohol.

“While inflammation is part of the body’s natural defense system to protect it after injury or infection, too much inflammation is unhealthy,” said Yin. “We hope our new findings on how this particular protein complex works can help us to understand morphine-induced inflammation and eventually lead to therapeutics to make morphine work more efficiently with fewer side effects.”

A paper on the subject is being published this week in the Proceedings of the National Academy of Sciences. Co-authors include CU-Boulder researchers Xiaohui Wang, Lisa Loram, Khara Ramos, Armando de Jesus, Kui Cheng and Annireddy Reddy and Linda Watkins, as well as Jacob Thomas, Andrew Somogyi and Mark Hutchison of Australia’s University of Adelaide. The National Institutes of Health funded the study.

MD-2 is a receptor found on human immune cells in the central nervous system known as glial cells and appears to be left over from millions of years of evolution, said Watkins, a distinguished professor in CU-Boulder’s psychology department. When MD-2 bound to morphine in the study, the glial cells -- which normally act as “housekeeper cells” to clean up debris and support proper neuron function -- excited the neurons that transmit pain signals and hindered the ability of morphine to suppress pain.

The heightened excitement of glia cells by opiates and other drugs appears to amplify the rewarding qualities of several commonly abused drugs, according to the research team. Glial cells, which originally were thought by scientists to hold neurons in the brain together somewhat like glue, outnumber neurons by up to 50 to one.

The team members used a multidisciplinary approach that included biochemistry, biophysics and cellular biology to investigate the TLR4/MD-2 protein complex and to pinpoint the relationship between MD-2 and morphine.  As part of the study the team used laboratory “knock-out mice” -- genetically engineered mice in which existing genes or proteins are inactivated -- to infer the function of TLR4 and its relationship with morphine-induced analgesia.

“The exciting thing about this research is that we have discovered that there is not just one receptor that detects morphine, there is a second one that nobody knew about before, namely MD-2/TLR4,” said Watkins. “We have shown this protein complex essentially cuts morphine off at the knees, preventing it from doing its job in controlling pain.”

As part of the study, several “small molecule inhibitors” developed and tested by the research team to target and deactivate TLR4/MD-2 demonstrated that the morphine-induced inflammation is exclusively tied to the protein complex.

Millions of Americans suffer from chronic, debilitating pain that makes it extremely painful to perform even the simplest activities like showering and dressing, and which differs from pain associated with injuries, which generally heal.  Chronic pain sufferers include victims of cancer and AIDS who have nerve damage.

It is estimated that four out of every 10 people in the United States are likely to be in chronic pain, costing the nation as much as $635 billion annually in lost productivity and health care expenses. The United States is one of the world’s highest users of morphine, which has been around since the 1850s and which ironically was first marketed as a cure for opium and alcohol addiction.

Yin said the CU-Boulder researchers have been working with the University of Colorado Technology Transfer Office, or TTO, and have filed a group of related patents on potential therapeutics for optimizing current pain management therapies. Several of the small molecule inhibitors used in the study to target and inactivate the TLR4/MD-2 protein complex have been exclusively optioned to BioLineRX, a publicly traded drug development company in Israel, through CU’s TTO.

“Using interdisciplinary approaches to look for unconventional drug targets is a central theme in my work,” said Yin. “Even in graduate school, I was attracted to the idea of ‘rational design’ -- using computer simulation and synthetic chemistry to design something useful like cancer drugs. Working across disciplines is where the future of science lies.”

Thinking out of the box for a cancer cure