Stopping cancer's knock on the door

Stopping cancer's knock on the door 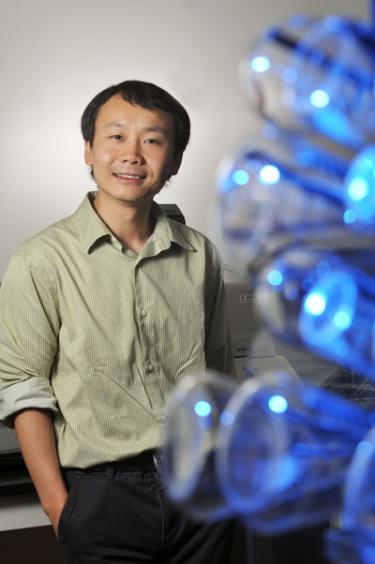 As a self-proclaimed “science nerd” in a Beijing high school, Hubert Yin considered biochemistry to be the ultimate in cool. It was the only science, he felt, that was capable of explaining what he thought was the most complex, most beautiful thing on earth– life at the molecular level.

“I was totally amazed by this ‘in depth’ understanding of how life works,” says Yin. “I was attracted to the idea of rational design where we use all of these fun toys, like computer simulation and protein engineering, to design something novel and useful, like cancer drugs.”

Yin is searching for unconventional drug targets: the ones that have been overlooked by drug companies. His focus is on cell membrane proteins, which act as windows and doors to the inner workings of all cells. Some viruses knock on the doors of the cell, hijacking normal cell functions, allowing them to gain entry through the cell membrane and take over the cell. Scientists have yet to discover just how that “knock on the door” occurs. 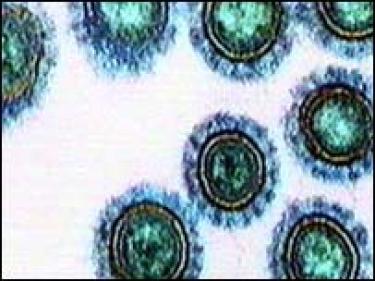 Yin is studying this process with the Epstein-Barr virus (shown, left), also known as Human Herpesvirus-4 (HHV-4), which was identified in 1964 as a cancer-causing virus. It is one of the most common viruses in humans, affecting approximately 95 percent of the U.S. population by adulthood. It is also infamously known as the virus that causes mononucleosis.

HHV-4 is one of at least six viruses that are known to cause cancer, and it is associated with some of the rare cancers: Hodgkin’s lymphoma, Burkitt’s lymphoma, nasopharyngeal carcinoma and other central nervous system lymphomas. Because it is so common and is associated with so many cancers, HHV-4 is an attractive target for the development of cancer vaccines and treatment.

Computer simulations have allowed Yin to study the process viruses use to knock on the doors of cells. He has rebuilt the Latent Membrane Protein, or LMP-1, down to the last atom using computer simulations in a membrane environment. LMP-1, when activated, induces an inflammatory response to HHV-4, which allows cancers to grow within the cell. Using these computer simulations, he hopes to predict how and why cells open their doors to these dangerous invaders.

“Our strength is bridging ‘in silico’ computer simulations with wet-lab experimental approaches,” says Yin who collaborated with fellow CU-Boulder biochemist and Biofrontiers Institute faculty member, Natalie Ahn, as well as CU-Boulder biologist, Jennifer Martin. Ahn provided her expertise in mass spectroscopy to understand the structure of the LMP-1 molecule. Martin is an expert on the Epstein-Barr virus and contributed her knowledge on the nature of the virus and how it causes cancer.

Yin’s next step is to take the data provided by the computer simulations of the membrane protein and use it to predict how it will react to potential drugs. It is even more difficult than it sounds. These proteins have defied exploration by many scientists before Yin. But these drugs may provide a process for treating HHV-4, and stopping deadly lymphomas in their tracks.

“Trying to achieve something that took nature millions of years to develop is an outstanding intellectual challenge,” says Yin. “And multidisciplinary approaches are the means we must take to approach this problem.”