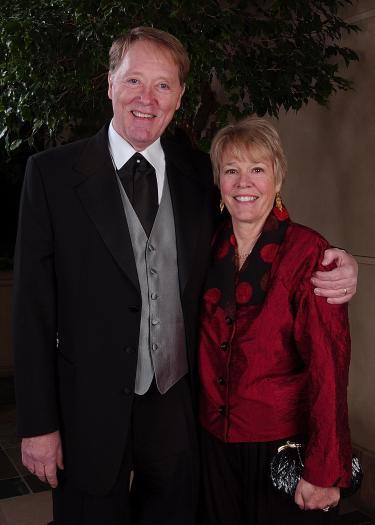 The University of Colorado Foundation today announced a $2 million pledge by Jack (Hist '64, MA '70) and Jeannie Thompson (Zool '64) of Boulder to fund the new Vaccine Development Laboratory in CU-Boulder's Systems Biotechnology Building, slated for groundbreaking in 2009.

The gift will bolster the capacity of the Colorado Initiative in Molecular Biotechnology, or CIMB, to spearhead scientific and medical advances. CIMB scientists include a Nobel laureate and numerous other renowned researchers working at the crossroads of science and engineering on projects such as the creation of cancer-detecting sensors and synthetic human tissue, and the development of new vaccines and pharmaceuticals.

"CIMB is a community of top researchers pooling their expertise to make new discoveries that have tremendous potential to improve people's health," said Leslie Leinwand, CIMB director and a faculty member on the Boulder and Denver campuses. "The Vaccine Development Laboratory will provide this diverse group of researchers with a unique and very powerful forum for scientific discovery."

Jeannie Thompson's 12 years of working in research labs, including at the National Institutes of Health and the University of Colorado Hospital, sparked the couple's interest in donating to the research lab. And Jeannie's position as incoming chair of the University of Colorado's fundraising arm motivated the couple to make a leadership gift that would inspire other CU supporters to donate to their areas of interest within the university.

"We're excited about supporting research that's personally meaningful, and also holds so much potential," Jeannie Thompson said. "I am a firm believer in leading by example."

The Thompson gift is the latest product of the couple's 40-plus-year relationship with CU-Boulder. That relationship originated in the early 1960s when, as CU students, they met at the legendary student haunt The Sink. It has continued with dozens of gifts to the university, including endowments that sponsor a history department graduate fellowship, writing awards for the Center of the American West and the Jazz Studies Program at the College of Music.

Founded in 1967, the CU Foundation is the nonprofit partner of the University of Colorado whose mission is to raise, manage and invest private support for the university's benefit.