Nobel Laureate Tom Cech to Return to University of Colorado 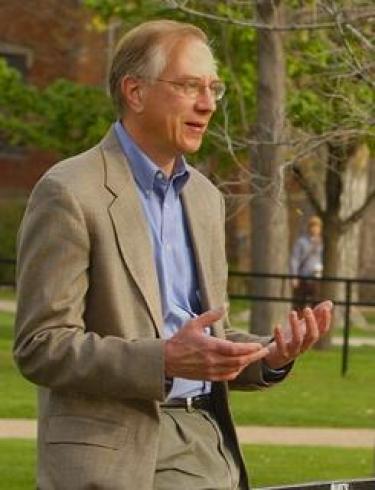 Nobel laureate Tom Cech is returning to the University of Colorado full time this month after a 10-year stint as president of the Howard Hughes Medical Institute, a nonprofit medical research organization headquartered in Chevy Chase, Md., and one of the nation's largest philanthropies.

A distinguished professor in CU-Boulder's chemistry and biochemistry department, Cech will resume teaching at CU-Boulder and will continue research efforts at his campus laboratory, which have been ongoing by Cech during his HHMI tenure.

Cech, who shared the 1989 Nobel Prize in chemistry for his discovery that RNA in living cells is not only a molecule of heredity but also can function as a catalyst, has been president of HHMI since January 2000 and a faculty member at CU-Boulder since 1978. He will resume his position at CU as an HHMI investigator, a position he was appointed to in 1988.

Cech said it was time to return home. "It's been an exciting decade for me to have been in Washington and have the privilege of leading this great research enterprise," he said. "I had to decide whether I wanted to continue on the administrative track or return to the ground level. I decided I really missed the daily contact with students, including teaching, and I missed the daily excitement of the research lab."

His plans are to teach a general chemistry course to CU-Boulder undergraduates in fall 2009. "I think you make the most impact on students if you catch them early and get them excited," said Cech. "I'm looking forward to the classroom."

Cech also will become director of the Colorado Initiative in Molecular Biotechnology, or CIMB, founded by CU-Boulder in 2003 to foster research, teaching and technology development at the interfaces of the life sciences, physical sciences, math, computational sciences and engineering. Cech will be working closely with Professor Leslie Leinwand of the molecular, cellular and developmental biology department, the current director.

"This initiative has been under the able leadership of Leslie Leinwand, and we will continue to work together on energizing the program and bringing together scientists from different fields who normally don't interact much," said Cech.

CIMB includes a planned $115 million research and teaching facility to be built in the CU-Boulder Research Park. With funding from both public and private sources, the 260,000-square-foot building is projected to host 60 faculty and more than 600 researchers from a wide variety of science, engineering and medical disciplines to collaborate on high-tech solutions to biomedical problems.

More on this story from CU News